The Riace bronzes are back

In the year 1972 two bronze statues from Greece dating back to 460-430 BC were found on the bottom of the Ionic Sea near Riace Marina in Calabria, Italy. On Friday, December 6, 2013 after four years of restoration work, the Riace Bronzes returned to the National Archaeological Museum of Reggio Calabria. They are currently being placed on anti-seismic basements, and the Hall of Bronzes will be reopened to the public in the late spring of 2014. 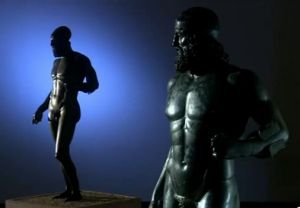 The finding and restoration

On 21 and August 22, 1972 near the Ionian coast of Marina di Riace, the police and the men of the Archaeological Superintendence of Reggio Calabria made a spectacular recovery of two large bronze statues, buried for centuries under the sand of the sea bottom: from then on they were known as the Riace bronzes. The statues had been sighted six days before by Stefano Mariottini, a Roman chemist doing underwater fishing.

The bronzes were intact and in good condition, but almost ten years of study and restoration were necessary before they could be brought back to their former glory. In the summer of 1981, the interest for the two statues was still very high: first in Florence, then in Rome, impressive crowds queued from the early hours of dawn to be able to see from close up the warriors that had come from the sea, just as if they were movie or rock stars. The crowds were not disappointed: majestic, imposing, the Bronzes embodied the ideal of beauty and strength. Dated to the fifth century BC, the statues showed the mastery in bronze work achieved by the sculptors of classical Greece. 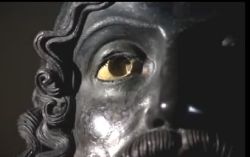 But, a little as is the case for Leonardo's Mona Lisa, the curiosity was also linked to the halo of mystery around them. The position of the arms and hands shows that in the beginning were holding spear and shield, and the shape of the head suggests that they wore a helmet. They were certainly warriors, gods, heroes or great leaders. Still today they are simply identified by the letters A and B.

Statue A is 198 cm (6ft 6in) high and is darker, Statue B is 205 (6ft 9in) and of a brighter green color, which points to a different bronze alloy. Someone suggested that they were part of a larger group of statues, transported by a Roman ship that sank during a trip from Greece to Italy. But in that case, where are the other statues, and the wreck of the ship? Another theory is that they were thrown into the sea during a storm to unburden the load: what is sure is that we'll never know why they were in the shallow waters near the coast of Riace.

The history of the Riace Bronzes

It was the first great mass phenomenon related to underwater archeology: ancient beauty seems to have an almost immediate impact in our time. The need for beauty is still connected to Greek culture, Greek beauty is still the most understandable; it was founded on nature with a strong intellectual foundation, the artists were also men expert in geometry and theoretical calculation.

There have been a great many speculations on the identity of the two gentlemen represented in the statues, and some cues were supplied by those aspects of restoration that are called "cognitive": between 1992 and 1995 restorers went to Reggio Calabria and emptied the statues because there was soil soaked in salt, which was damaging the metal. Afterwards the statues were brought to Florence for a second phase of the restoration.

The soil inside the statues was analyzed and it became clear that the so-called Bronze A - the younger one with the "nasty" air, teeth coated in silver, a peremptory look, a position turning to his right - had been cast in the city of Argos, and this was communicated by a geologist at a conference that was held at the Academy of the Lincei, Florence. According to prof. Moreno, a historian of Greek and Roman art, Bronze A could represent Tydeus, a fierce hero of Aetolia, son of the god Ares and protected by goddess Athena.

The other statue, Bronze B (the older one) would instead be Amphiaraus, a warrior prophet who foresaw his own death beneath the walls of Thebes. Both in fact participated in the legendary expedition of the city of Argos against Thebes, which had a disastrous ending. This hypothesis led to the identification of the artists of Argos at the time when the Bronzes could now clearly be dated. 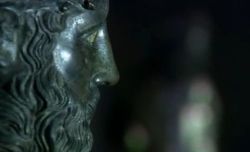 The author of the bronze A - the younger one, Tydeus - would be Hageladas, a sculptor of Argos who worked at the sanctuary of Delphi in the mid-fifth century BC; Bronze A is indeed very similar to the decorations in the temple of Zeus at Olympia. For Statue B - the older one, Amphiaraus - prof. Moreno supports the hypothesis of Greek archaeologist Geòrghios Dontàs who stated that it was sculpted by Alcamenes, a native of Lemnos, honored with Athenian citizenship for his artistic talent.

What is certain, is that at Argos there existed a group of several figures, including the "Seven of Thebes" and their descendants, and this group was connected to Hageladas of Argos and his school. Both Tydeus and Amphiaraus were warriors. The former a deadly hero, a lover of war, fighting, killing, opposed in the myth to the latter, a fortune teller who is forced to go to war but saw only destruction in it, a message still very current. These sculptures were made at the time of a key historical moment, when Argos allied to Athens had defeated Starta in a battle, actually not a very important one, but the Athenians had celebrated it in their most beautiful portico in their agora, and at Argos on the agorà the citizens wanted a group that would recall the glory of ancient Thebes.

The art of the Riace Bronzes

The bronzes have considerable muscle elasticity being in a position defined as "chiasmus" (from the Greek letter "chi"). More specifically, bronze A (the Young man) appears more nervous and vital, while bronze B (the Old man) seems more relaxed. The statues convey a remarkable sense of power, mainly due to the arms being strongly distanced from the body. The bent arm was certainly holding a shield, the other hand a weapon. Bronze B's head is oddly shaped and appears small because it allowed the placement of a Corinthian helmet. The right arm and the left arm of the B underwent a second welding, probably for a restoration in antiquity.

The study of the materials and casting technique reveals a certain difference between the two statues, which might be attributed to different artists or, if made by the same artist, to distinct periods or different places. The Riace Warriors were extensively discussed in the BBC documentary "More Human Than Human" of the five-part series "How Art Made The World", written and narrated by Dr Nigel Spivey, who expressed the opinion that they are the "best statues ever made."

Dr Spivey says: "Greece created something more human than human. The Riace Bronzes are relatively unknown to the world at large; nowhere on earth can sculptures be found as astounding as these, nothing matches them in terms of skill and execution, they are absolutely the best statues ever made. This quality of craftmanship, this subtlety of detail, is impossible to achieve even today. It is hard to believe that they were made not just a little before the Italian Renaissance, but 2000 years before. 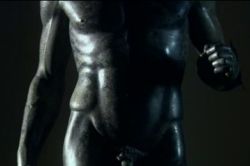 Every artist wants to divide the sections of the body clearly, but here this is taken to extremes. The division between top and bottom has been exaggerated by a crest of muscles across the waist, modified as it cannot be on a real human. The legs have been made artificially long to match perfectly the length of the upper body. 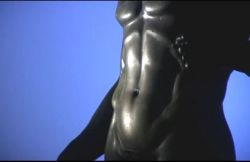 To stress the symmetry and separation of the two sides, there's an implosive deep move running up the center in the chest. And while the muscles on the chest are totally relaxed, the muscles of the back are tense and impossibly well-defined.

The central channel of the spine is deeper than you'd ever see on a real human, and to improve the line of their back, these men have no coccyx bone at the base of their spine. These are unrealistic bodies, reality being exaggerated.

The first civilization capable of realism had used exaggeration to go further, and it's that instinct which still dominates our world today. The ancient Greeks cared about physical perfection, and so did Michael Angelo: he too created unrealistic bodies that were more than human, what artists chose to exaggerate was to express more than realism could".