Villa Santa Maria rises against the southern slope of the Monte Vecchio, on the left of the Sangro river. The territory is 16 sq Km wide, in a mountainous area among woods, pastures and fields. This small center is world-famous as the homeland of cooks, and the presence of a prestigious Hotelier Institute maintains the tradition. 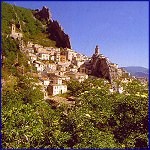 The development of the first settlement took place where today the church of Santa Maria in Basilica rises. The history of Villa Santa Maria started in the eighth century after the the Lombards came to Italy (569). The Lombard kingdom was divided into dukedoms among which that of Benevento including Campania, Lucania, Boiano, and the Sannio. The Frentania area, with the districts of Lanciano, Larino and Vasto, was included in the Sannio. The territory of Villa Santa Maria belonged to the district of Lanciano.

In 703 the three Lombard brothers Tato, Taso e Paldo founded the convent of San Vincenzo al Volturno. The abbey of San Vincenzo al Volturno received the territory with a donation and sent to the spot monks to build the church and the attached convent. The monks, probably, were accompanied by farmers who founded the nearby village, which from the abbey took the name of the Villa Santa Maria in Basilica. During the domination of the Franks in Italy (774-888 A.D.) Villa Santa Maria continued to be part of the dukedom of Benevento, and was later included into the dukedom of Spoleto.

About 930, a powerful family of Frankish origin settled in Abruzzo and gave rise to the Borrello dynasty who became lords of a vast feudal dominion. The lands of those nobles went as far as Molise and Chieti, the middle Sangro area and the Trigno valley. This territory took the name of "stato Burrellense" and included also Villa Santa Maria.

In 1024 the Normans conquered a large part of southern Italy. The descendants of the Borrello were however able to maintain their possessions.

In 1268 Villa Santa Maria was destroyed by one of the many raids of the Saracens. One year later the Countdom of Teate (=Chieti), including Villa Santa Maria, was given by King of Naples Charles of Anjou to the French noble Rudolph of Cortiniaco. Villa Santa Maria was set on fire in the 14th century by order of the duke of Vaches to punish a rebellion against the feudal oppression. It was later reconstructed and in the early 15th century belonged to Giacomo Caldora, lord of Castel del Giudice. It was inherited by Antonio Caldora who, defeated by Alphonse of Aragon, had to give it up to Giovanna, wife of Ferdinand of Aragon, Alfonso's successor.

In the 16th century Villa Santa Maria passed to the Caracciolo princes. In the 17th century, because of a terrible plague and driven by the need to find safer places against the continuous bandit raids, the surviving inhabitants abandoned the original abode moving to the present spot, on the right bank of the Sangro river. The descendants of the Caracciolo family governed the little center until feudalism was abolished in 1806.