Chieti lies on a crest to the left of the Pescara river, with its unmistakable profile with the high belltower of San Giustino against the sky, a few km away from the Adriatic Sea, with the Majella and Gran Sasso in the background. It was a Roman town called Teate, and an important medieval centre, with Roman and medieval ruins side by side today. 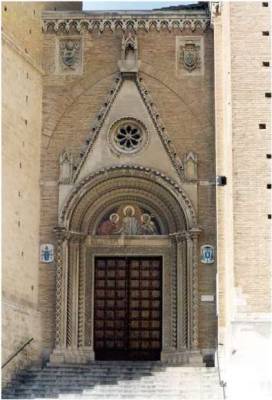 The origins of Chieti are lost in the mist of time, and many like the legend that it was founded by Achilles and named after his mother Tetis. The ancient name of Teate, may derive from ti(f)a (=tiati=teba, meaning "forested hill") and existed already in 1000 BC, when the town was the capital of the Marrucini people, who in the following centuries allied with the Romans agains Pyrrhus and Hannibal, then joined the rebellion of the Samnites against Rome.

Under the Roman empire it was a municipium and many monuments and buildings are left of that period. With the fall of the Roman empire the town declined in importance, and was destroyed in 801 AD by the Franks. Later on it was included in the Duchy of Spoleto, and was occupied in turn by the Angevins, Aragonese and Austrians.

The angevin domination marked a period of revival and in the late 12th century Teate was made capital of Abruzzo Citra, the area south of the Pescara river. At that time Chieti also had the privilege of its own mint, and there was a powerful archbishopry.