History and meaning of the Italian Tricolour flag

According to official historiography, the Italian tricolor first appeared on 14 November 1794, when two students of Bologna, Giovanni Battista De Rolandis and Luigi Zamboni led an uprising against the Austrian absolutist power, and as an emblem of the rebellion chose the cockade of the Paris revolution, but maybe to distinguish it from the French, decided to swap the blue color with green.
On May 18, 1796 in Milan the colors of this cockade were accepted by Napoleon, who gave the Milan Civic Guard, the Lombard Legion and the National Guard a flag with vertical stripes, green, white and red. During this ceremony Napoleon specified that these three colors came from the cockade of the Bologna uprising: "Since they [the two students] chose these three colors, so let them be."

On October 9, 1796 the Italian legion, an emanation of the Lombard Legion, received from Bonaparte a Tricolour flag with the same colours as the cockade of De Rolandis and Zamboni. On 18 October of the same year, the Parliament of the Cispadane Republic, in session in Bologna and Modena, decreed that a flag was to be created with vertical stripes with these three colors, symbol of the new Cispadane Republic in its mission as the first step of a new Italian Republic.

The Italian tricolor national flag was then officially established in Reggio Emilia on January 7, 1797, when, as proposed by deputy Giuseppe Compagnoni, Parliament chose a "standard or flag of Three Colors, Green, White, and Red."

Why the three colors?

The first Italian campaign conducted by Napoleon between 1796 and 1799 had crushed the ancient system of states in the peninsula. In their places there were numerous democratic republics of Jacobin inspiration: the Ligurian Republic, the Roman Republic, the Neapolitan Republic, the Anconitana Republic. Almost all of them adopted, with variants of color, flags with by three bands of equal size, based on the French model of 1790.

And the "Italian" military departments, allied to the army of Bonaparte, had banners in the same shape. Among them, the regimental flags of the Lombard Legion had the colors white, red and green, deeply rooted in the collective heritage of that region: white and red, indeed, appeared in the ancient coat of arms of Milan (a red cross on a white field), while green were, ever since 1782, the uniforms of the civic Guard of Milan.

The same colors, then, were also adopted in the banners of the Italian Legion, which gathered soldiers from Emilia and Romagna, and probably this was the reason that prompted the Cispadane Republic to confirm these colors in their flag. At the center of the white band they placed the coat of arms of the Republic, a quiver containing four arrows, surrounded by a laurel garland and decorated with an arms trophy.

Most of these Jacobin republics did not survive the Austro-Russian counter-offensive of 1799, others, after Napoleon's second Italian campaign came together in the Kingdom of Italy, which was to last until 1814. Nevertheless, these republics represented the first expression of the ideals of independence that were to fuel the Risorgimento. It was in those years that the flag was no longer perceived as a dynastic or military emblem, but as a symbol of the people, of the liberties just conquered and, therefore, of the nation itself.

The Tricolour during the Risorgimento

In the three decades that followed the Congress of Vienna, the tricolor flag was stifled by the Restoration, but continued to be raised, as a symbol of freedom, in the riots of 1831, in the Mazzini riots, in the desperate quest of the Bandiera brothers, in the uprisings in the States of Church. Anywhere in Italy, the tricolor expressed a common hope, that ignited enthusiasm and inspired poets. In 1847 Goffredo Mameli wrote in his "Song of the Italians": "May one flag, one hope gather us".

And when the revolution year 1848 began, with the granting of Constitutions, the flag became a symbol of national rebirth by now, from Milan to Venice, from Rome to Palermo. On March 23, 1848 at the beginning of the First Independence War, the King of Sardinia, Carlo Alberto spoke to the populations of the Lombardo-Veneto with these words: "(...) to better show with external signs the feeling of Italian union we want our troops (...) to carry the Savoy Shield superimposed on the Italian tricolor flag."

At that time to the dynastic coat of arms a blue border was added, to avoid that the cross and the shield became confused with the white and red bands of the flag.

From the unity of Italy to the present

On March 17, 1861 the Kingdom of Italy was proclaimed and its flag continued to be, out of custom, the tricolor of the first war of independence. But the lack of a special law in this regard - apart from military standards - led to the proliferation of flags of different shape from the original, often even arbitrary. Only in 1925 the models of the national flag and the flag of the state defined by law. The latter (for use in the royal residences, in the parliamentary seats, offices and diplomatic missions) was to add the royal crown to the shield.

After the birth of the Republic, a presidential decree of June 19, 1946 established the provisional shape of the new flag, which was confirmed by the Constituent Assembly in its meeting of March 24, 1947, and included in Article 12 of the Italian Constitution: " The flag of the Republic is the Italian tricolour: green, white, and red, in three vertical bands of equal dimensions."

Symbolism of the Colors

Writers, poets, historians and others found deep symbols in the three colors. First a religious symbolism, since the three colors of the Italian flag are (along with purple and black) at the base of the Catholic liturgy: white, green and red appear since the Middle Ages as the respective symbols of the three cardinal virtues, faith, hope and charity. This symbolism also appears in the Divine Comedy (Purgatorio - XXIX, lines 121/126), with the three women of three colors that appear to Dante. one bright red for charity, the other green for hope, and the third one white for faith, who in their dance are now guided by charity now by faith, while charity gives rhythm:
Tre donne in giro da la destra rota
venian danzando; l'una tanto rossa
ch'a pena fora dentro al foco nota;

Three maidens at the right wheel in a circle
came onward dancing; one so very red
that in the fire she hardly had been noted.

The second was as if her flesh and bones
had all been fashioned out of emerald;
the third appeared as snow but newly fallen.] 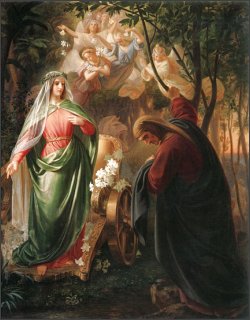 Over her snow-white veil with olive cinct
Appeared a lady under a green mantle,
Vested in colour of the living flame.

The basic structure of religious and social thought of the populations derived from the Indo-European root (Indians, Persians, Greeks, Romans, Germans, Celts) is the tripartite function of Priests, Warriors and Peasants. This social division is also the mirror of a divine harmony, where the gods themselves are also divided, classified and differently worshiped.

The three trifunctional deities Jupiter, Mars and Venus in Rome were linked to colors: White, Red and Green, which corresponded to the functional values (sovereignty, war, fertility), as well as to the original tribes into which Romulus divided his people (Ramnes, Luceres and Titienses) and were even reflected in the factions in circus games (albati, russati, virides = whites, reds and greens).

The three colors in common tradition

In the latter part of the 19th century scholars and writers variously interpreted the colors of the Italian flag, adding poetic meanings. Among them, the most popular version is that from Giosuè Carducci's speech in the hall of the town hall of Reggio Emilia, on January 7, 1897, the first centennial anniversary of the official adoption of the flag.

«Not rampant eagles and lions, not overcoming beasts of prey, in the holy banner; but the colors of our spring and our land, from Cenis to Etna; the snows of the Alps, April in the valleys, the fire of volcanoes.

And immediately those colors spoke to generous and kind souls, with the inspirations and effects of those virtues on which our homeland resides and gets pride; white, a serene faith in the ideas that make the soul divine in the constancy of the wise; green, a perpetual revival of hope towards good results in the youth of poets; red, the passion and the blood of martyrs and heroes. And immediately the people sang to their flag that was the most beautiful of all and always wanted it and with it, their freedom..."