The earthquakes in the history of Aquila 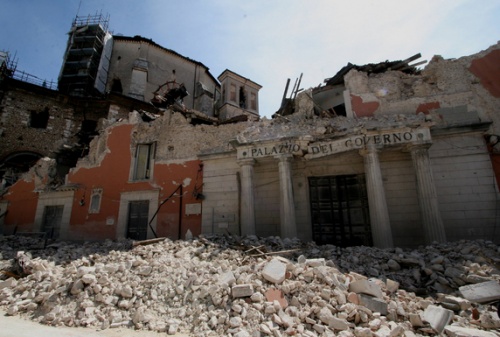 The town lies in one of the most seismic territories in Italy, and since its foundation has been devastated many times by earthquakes.

The first earthquake mentioned in history dates back to 13 December 1315. The first quake had occurred on 1 February of that year. But the greatest damage came on December 13, whith aftershocks for the next four weeks. Among the damage reported remarkable were those of the church of San Francesco. Citizens lived and slept outdoors or under canopies or for a long time that winter.

A strong earthquake occurred on 9 September 1349, which is estimated at 6.5 degrees Richter and producing damages of the 10 degrees of the Mercalli Scale. Large stretches of the city walls were damaged or ruined as well as many houses and churches, victims were 800. At the time residents were less than ten thousand, so the death toll amounted at almost 10% of the population. The large dust cloud that rose on the cities for a long time prevented the sudden rescue of survivors under the rubble.

Other, powerful aftershocks occurred the following day, September 10th 1349, causing much of the population to take refuge in the surrounding countryside, where huts were built with wood and straw. After about two months, with winter coming, the city saw the return of the population, who began to ascertain the actual damage and remove the rubble. The operations of digging and land reclamation required the support also of the inhabitants of the countryside and nearby Amiterno and Forcona. The church of Santa Maria di Paganica collapsed and the church of San Francesco, which had already suffered severe damage in the 1315 earthquake was also completely destroyed and had to be razed to the ground, the debris were accumulated in front of one of the doors to the city, called Porta dei Leoni, which remained closed, was not freed later and then was finally walled. The difficult, long reconstruction discouraged some people, who preferred to return to the villages and castles from where their ancestors had come. Facing massive depopulation and the consequent prospect of seeing Aquila deleted among the cities of the Kingdom, Lalle Camponeschi Count of Montorio, ordered the breaches in the city walls to be closed and set up garrisons here (from the Chronicle of Buccio de Ranallo).

Another earthquake took place in Aquila on 5 December 1456.

Still another on 26 November 1461, estimated at 6.4 Richter and a destructiveness of 10 degrees Mercalli. After the main event of November 26, there followed a sequence of earthquakes that lasted for about two months, with some strong shocks on 4 and 17 December and on January 3 and 4 of the following year. Historical sources mention the almost total destruction of Onna, Poggio Picenze, Castelnuovo and Sant'Eusanio Forconese. "... to the disastrous state of the city ruined in so many parts, and failing in all others, so much so that the fourth part of it was razed to the ground, and the other three fourths, were damaged, the no less deadly situation of the surrounding villages must be added. There the damage was uneven because the most hit were the castles of Sant'Eusanio, Castelnuovo, Onda, and Poggio near Picenza, which fell almost entirely; in Sant'Eusanio all houses collapsed, and all churches so that not even the side walls were left standing and more people than elsewhere died, so that it was said as completely destroyed. Identical destiny befell to Castelnuovo which became a pile of stones, and also the wall towers fell with the death of 28 people, all native of the place. In Villa Onda not even a house remained standing. (Anton Ludovico Antinori, sec. XVIII. Annali degli Abruzzi)

Another earthquake struck the city on 11 April 1498.

Numerous aftershocks in 1646 had the breathtaking climax on April 28. Filippo of Secinaro was an eye-witness, and in his Treatise described the events as follows: "During 1646 the continuing, and many motions of the earth, suddenly occurred in the City of Aquila where the shocks lasted for sixty-five days, and the shockswere 166 and the roars of the earth, five hundred and forty-two, these earthquakes were also felt in other places near and far, as the fame spread in the world." The epicenter area was subsequently identified in the Gran Sasso massif and reached an intensity of VII degree of the Mercalli Scale.

The most severe earthquake in the town's history took place in 1703. The first shock of the long sequence occurred was on 14 October 1702, the last well over one year later. Preceded by the shock of 14 January 1703 (this earthquake had epicenter in Norcia), the worst shock was recorded on February 2 1703 which is estimated as 6.7 degrees on the Richter Scale and which caused devastation estimated at 10 degrees on the Mercalli Scale. Almost all churches and public buildings collapsed or were seriously damaged. It is estimated in the the various shocks that hit the town that year over 6,000 people died. The survivors left the city as they deemed it too risky. Aquila, however, was repopulated by will of Pope Clement XI, who, believing that the city should be reborn at all costs, sent priests and nuns freed of their celibacy vows to gradually repopulate the city.

Another earthquake occurred in 1706, and again on 6 October 1762, estimated as 5.9 degrees on the Richter Scale.

L'Aquila was then hit, though secondarily, by the violent Marsica earthquake (11th degree Mercalli Scale) of 13 January 1915. Then, an earthquake hit the city the following year, in 1916, estimated at 5.2 degrees on the Richter Scale.

On 24 June 1958 at 6.07 GMT an earthquake of magnitude 5.0 degrees Richter Scale hit the Middle Aterno Valley. More aftershocks were felt in 1985, although the epicenter area was located in the Parco Nazionale d'Abruzzo.