Liz and I arrived in Rome on Thursday May 7th, 1998 at 9:00am. By the time we grabbed our bags, cleared customs and got behind the wheel of the rental car it was 10:00am. We proceeded to drive from the Rome airport to Schiavi Di Abruzzo. The path we took was the A1 to Cassino (arrived about 11:45), ss82 to ss85 to ss650 to an exit for the town. There was a toll on part of the A1which required us to pick up a ticket and pay at the other end. The charge was 10,000 lira. The towns we past were Venafro and Isernia. We arrived at Schiavi a little before 2:00pm. From the exit off ss650 towards Vasto there was a right hand turn that began the winding several mile ascent to the mountain top on which Schiavi sits. On the way we passed through several of the hamlets that belong to Schiavi (e.g. Taverna). At one point we had to pull over to allow an old man with a donkey guiding his goats to pasture.The goats wanted to come over to the car but the man kept them away. We waved and he waved back (the only Italian from that village that waved).
After several winding miles we finally got our first glimpse at the town which sits packed on top of one of the highest mountains in the area. The church is clearly visible as the most dominant building at the one end of the town. Upon entering the town we were greeted with stares and such that would seem unfriendly, suspicious on the surface. Liz and I parked the car near the church and immediately saw a street named Cirollo (close!). We entered the church and found it to be absolutely beautiful. The kind of old church that would be create a.... 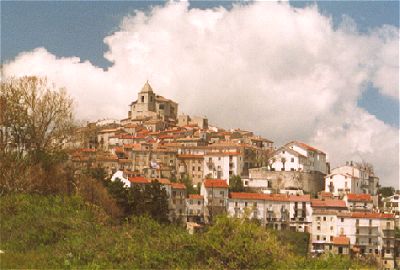 After walking around a little and attempting to go to the Municipio where the town records are stored (it was closed), we made our way to the town square where there was some shops. Liz was hungry so we stopped at a bar/pizzeria. The locals who were talking inside , quickly grew quiet as we entered. Liz and I asked for Pizza but the lady behind the bar said none left. She pointed us to where a case had a menu of different sandwiches (Panini). We both order proscuitto/formaggio sandwiches. For drinks Liz ordered a hot chocolate while I had a beer. Liz loved the hot chocolate so much that she ordered another one. While we were ordering, I opened up my passport to show that I was a Cirulli to the woman behind the counter. I then wrote down myself, my dad, papa and great papa's name on the paper to show her that Papa was from Schiavi. She explained to the others in the place that we were relatives of Adolpho Cirulli and asked them if they new of him. Now everyone was very friendly to us whereas before they were pretty quiet. They all discussed this at length but no one remembered our particular family.

After eating we walked to a small florist shop and once again showed my passport. At this time the lady bartender came over and explained in Italian what we were looking for. The florist made a couple of calls and then motioned us to follow him in his car. He took us to the Municipio where he had called earlier to wake the guy up. We proceeded to pour over the records in hope of finding Papa's birth record. We started from 1890 until 1902 and found no Adolpho Cirulli other than the Adolpho Giustino Cirulli born to Ireneo and Maria Cirulli on November 3, 1898. The clerk typed up a notice of the birth with the all of the details as written in the town's books. Scanned in this document is the certificate.

The florist then took us to a known relative of Adolpho G. Cirulli but either she wasn't home or did not want to see us. We could not understand what he said to us culiminating in throwing up his hands and smiling at us as if to say "I tired". As it was getting late and Liz and I needed to get back to Rome, we left about 5:00pm.

We both wished we had the time to go to Dogliola which was Ginga/Nana's birth place which was only about 10 miles away. The problem is that 10 miles from mountain top to mountain top would be about 1 hours ride.

All in all it was exciting to me to be standing in the village that perhaps our little Papa walked, played and worshipped with our great grandparents when he was a young child. I got a particular thrill to be drinking a beer in the town bar and toasted him. I would like to be able to go back and spend some more time in Schiavi and also to find Ginga/Nana's village and the house she was born in.