And she tells her tales to the children [A Christmas Fable]

Giuseppina Signori, born in 1926, an elementary school teacher from 1955 to 1991 - we do not know the number, but surely many were the Christmas fables and legends that she told her children, maybe against the background of the landscape and the villages-mangers of Petrella Liri and Balsorano, placed like jewels in the Valle Roveto where she was a teacher.
Versione Italiana ➩ 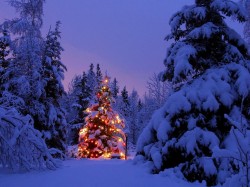 Later Giuseppina moved to other places, and told her tales to Paganica di Montereale, Aringo, to the upper Aterno Valley: other landscapes, faraway, seemingly difficult to reach, but not for the light journeys of fables that were also drawn, illustrated, hung on the classroom walls, in order not to forget them; another way to fix those tales to the culture of folk history, the landscape, to its events and timeless myths, above all about Christmas.
«Also at Christmas we used to count the 9 stars, for twelve evenings. Then on the twelfth night you would go to sleep and dream of who you will marry, as it was established. It happened to me too - Giuseppina continues in her home in Pagliare di Sassa, a village next to the province capital -. a man knocked to the door of the elementary school, I saw him, he was that one, it was him, he became my husband ". Then she begins to tell the three fables, which she wants to stress, are for children...

It was the night of Christmas. In all the houses the birth of Jesus was celebrated but one boy who was working far away from home felt homesick in his heart and wanted to return. He decided to set off but it was dark and in order to reach his home he had to cross the forest. And what if he met the wolves, what could he do? He prayed Child Jesus and started his journey.

It began to snow and very soon a candid mantle had covered everything. The road could not be seen any more. The boy began to cry, but miraculously the tree tops in the forest were all covered with small lights and following those lights he arrived home where he found his parents who joyously welcomed him and all together they celebrated the birth of Jesus. And it was then that the custom to make a Christmas tree in every house began.

And still another... It was Christmas, festive reunions everywhere. In every house joy reigned: people ate and drank and everybody was ready to go to church for the midnight Mass. But in one home there was a poor child, but so poor that he did not have anything to donate to the baby Jesus. But he remembered he hat seen in the forest a green plant, though with some thorns.

The green of its leaves was so beautiful and then he thought to would pick up a branch to donate it to the Child Jesus. So he went into the forest and while detaching a twig he was wounded on his finger by a thorn, and the blood drops, falling on the leaves, were turned into little red balls that still today appear in the holly plant. The Child Jesus was so happy of the gift and smiled at him from the crib.

Still another... In a hut, in the middle of the forest, lived an elderly couple. They were wife and husband but they did not have children. They were alone and during that day they had not had the force to make the firewood. It was Christmas. Bells could be heard in distance, and the bread chest was nearly empty, but one hardened bread piece, soaked in water was enough to feed them. From the cracks in the door freezing wind came in and the poor couple were shaking for the cold.

All at once, after they extinguished the candle so it would not be consumed, they saw, inside the extinguished fireplace, two live coals burning. They extended their hands towards the fire and a nice warmth came through their bodies. They thanked the Child Jesus for his mercy and fell asleep. In the morning, when they woke up, they saw in the fireplace their cat that had warmed them with the heat of her eyes.