Fountain of the 99 Spouts in Corfu

A little bit of Italy flows in a Corfu man's backyard - Village man builds a version of the Fountain of the 99 spouts in tribute to his parents' hometown and his family's heritage - By Amy Givens, Daily Staff Writer.
"CORFU - Beniamino O. Ianni has a little piece of his parents' hometown in his yard." Sort of. Ianni has created a replica of an immense ancient Italian fountain, the Fountain of the 99 Spouts, located in L'Aquila, Italy. He scaled the 99 spouts down to 19. "I've alway swanted to do this, to make a miniature of it, because I've been there and seen it," Ianni said. "A lot of thought went into it." 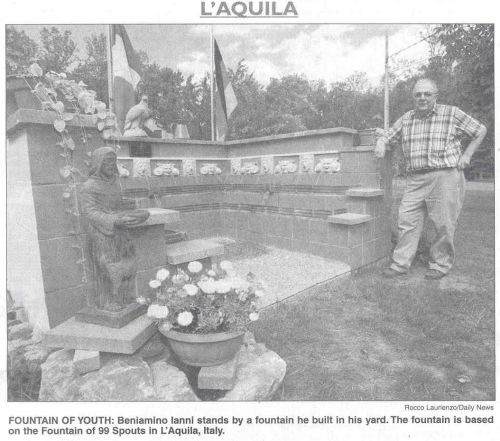 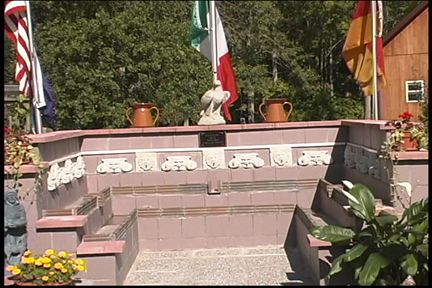 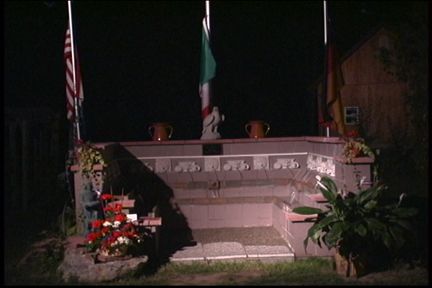 The fountain was unveiled at 2p.m. Saturday at Ianni's house, 12 Lawrence Ave; the public was invited to the unveiling. The fountain is dedicated to Ianni's mother and father, Salvatore Ianni and Laura Ciuffetelli, who left Aquila, Italy, and arrived at Ellis Island on Dec. 22, 1920. They brought their 11-month old son with them, Ianni's older brother. They moved to Oakfield, where Ianni grew up. "I have so much respect for the immigrants that came here and raised a family," Ianni said.

He has visited the fountain six times in Italy. The fountain was built in 1272, and legend said that it was a symbol of the unification of 99 castles in the region. The castles are represented by faces of monks, male and female heads, satyrs and horses, among other things. Ianni has a picture of it from 1950, when women were washing their clothes in its waters. These visits convinced him to recreate the fountain for himself, and honor his parents' heritage. 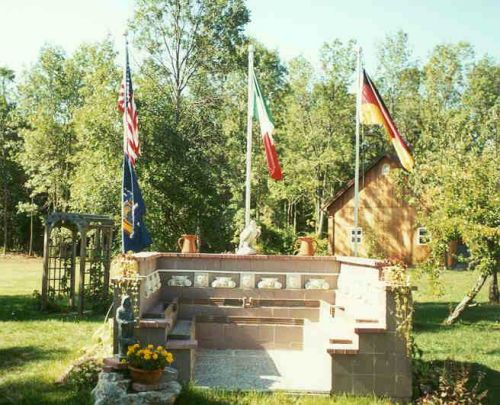 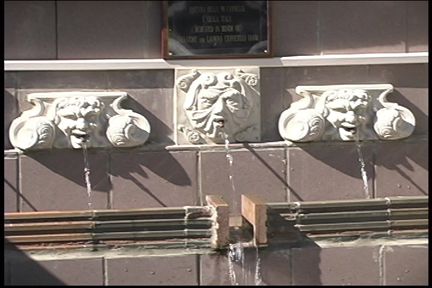 "It started as a four by six, and it just got bigger and bigger and bigger", Ianni said. Ianni said he decided to increase the size so that he could walk into the center of the fountain. The fountain is situated off to the right of Ianni's front yard, in between Ianni's garden and his house. A park bench is also set up facing the fountain, and it is lit for night-time reflections. Ianni has four flags flying behind the fountain: Italian, United States, New York and German, his wife's heritage.

He was going to buy the replicas of the faces that surround the spouts of the fountains from a man in Williamsville, but found they were prohibitively expensive. The man rented Ianni the moulds, and Ianni cast the spouts himself.

The fountain is trimmed with a stone eagle, L'Aquila translates to "the eagle" and the bird is the symbol of the city. Two clay jugs with curving handles also adorn the fountain. Ianni said his mother used to carry similar bronze jugs full of water on top of her head when she lived in Italy.

Ianni worked as a rural letter carrier in Corfu. Now retired, he spends time gardening, growing tomatoes, peppers and grapes among other things. Ianni said he will have another fountain turned on for the unveiling Saturday: his soda fountain. This, too, has a special meaning. Ianni was a soda jerk, a person who worked at a soda fountain, when he met his wife. "I hired her, and then I married her". Ianni said of Linda. Ianni and his wife have six grown children and six grandchildren.