A feast is celebrated in Casalbordino on June 11 in memory of the apparition of the Virgin Mary to a peasant from Pollutri, Alessandro Mutii.
On 11 june 1576 there was a terrible hailstorm and the old peasant from Pollutri went to check what had happened to his wheatfield in the Piana del Lago. Before he could reach it, he heard the church bells and knelt down to pray: right at that moment he saw Our Lady, who told him his field was spared, since he had prayed, and invited him to tell the parish priest that the other peasants had been punished for not respecting the Third Commandment. 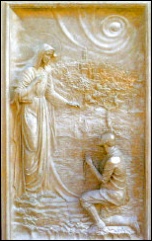 A chapel was built on the place, and the peasant's son became a priest and wrote down his father's story on a paper that is still kept in the sanctuary. Miracles followed in the place, which came to be known in the centuries as "Maria Santissima Madre dei Miracoli". The small rural church in the course of the centuries was changed and enlarged till reaching its final form in 1824.

Every year on June 11 the sanctuary is transformed in a destination of pilgrims coming not only from Abruzzo, but also from bordering regions. Even today there are pilgrims that spend the night in side chapels waking in prayer; and many after receiving a grace leave in the sanctuary their "ex-voto".

The Madonna dei Miracoli is represented in two ways: either standing in the action of admonishing the pious peasant or sitting on an oak, surrounded by a dazing light. The origin of this celebration can be connected to the ancient peasant and agrarian cults connected to goddess Diana, as shows the presence of hail, a weather phenomenon greatly feared by farmers, and of the oaktree.

In 1925 the sanctuary was entrusted to Benedictine monks who built a monastery nearby. The present sanctuary was consecrated on 11 August 1962.

The pilgrimages in the sanctuary were so impressive that poet Gabriele d'Annunzio mentioned it as a pagan rite in his poem Trionfo della Morte, a scene which painter Francesco Paolo Michetti, native of Tocco da Casauria, represented in the huge painting called "La via degli storpi" (Route of the Cripple), made for the Great Exhibition of Paris if the year 1900, now kept in the Townhall of Francavilla.