The Cathedral of San Berardo

A real jewel in Teramo, the cathedral of Saint Berardo was begun in 1158 in place of the ancient Santa Maria Aprutiensis, destroyed by a fire.
The many restorations through the centuries made this monument one of the most unusual, composite architectural work in Italy. The present cathedral is the result of the union of two churches: the most ancient part, Romanesque, of the XII century, coincides with the aisles and part of the transept, the other part, after the apse, is Gothic, deriving from an enlargement ordered in the following century by bishop Nicolò degli Arcioni (1317-1335).
Versione Italiana ➩

The inside was modified most probably in the latter half of the 15th century and transformed entirely in 1739, when baroque forms were introduced. It was restored to its original architecture in the years 1929-1933 thanks to bishop Antonio Micozzi. 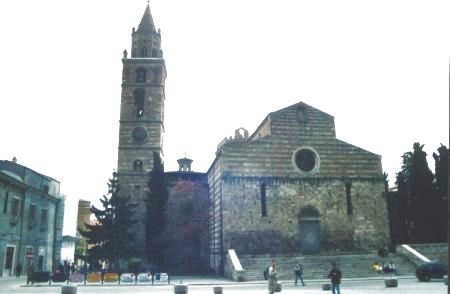 A very special feature of this church is the presence of two façades: a more ancient one turned toward Piazza Orsini, the other more simple, with a never used portal, which opens into Piazza Martiri della Libertà. 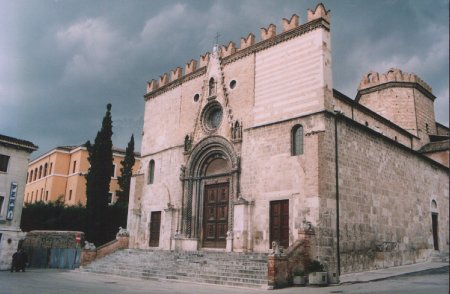 The more ancient façade, rectangular and surmounted by a Ghibelline battlement, is built in stone and bricks. Also here there are a number of different styles that mirror the different construction times. The lower part dates back to the 12th century; the portal, ordered by Nicolò degli Alcioni to Diodato Romano in 1332, is in the "cosmatesco" (a school of marble mosaic masters) style and contains splendid mosaic decorations.

Then there are three statues by local artists, representing Christ in the act of blessing, at the top, on the right St John the Baptist and on the left Saint Berardo. On the two sides of the portal two mullions sustain the precious figurines of the archangel Gabriel and of the Annunciation, work of the celebrated Abruzzese artist Nicola from Guardiagrele, 15th century. The truncated pillars placed to the sides of the portals witness the ancient project of a porch, never carried out. 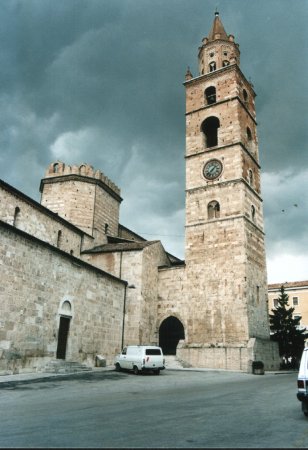 On right of the church rises the bell tower, 48 mt high, whose square, lower part, dates back to second half of the 12th century; the upper part is formed by an octagonal body and a pyramidal cuspid, rich in Gothic ornaments, and is the work of Anthonio da Lodi (1493). The sober, imposing inside is in three aisles divided by pillars surmounted by round arches, a typical feature of the Romanesque style, culminating with the great octagonal "tiburio".

Through a flight of stairs it is possible to reach the part built in the 14th century, with splendid Gothic arcades based on very high, round and octagonal pillars. The roof in wooden beams is decorated. Every field of the roof preserves the coats of arms of the many ecclesiastical figures contributed to the reconstruction. Over the walls remains of 15th century frescoes can still be admired.

On the two braces of the transept there are a chapel, hosting a splendid polyptych by Jacobello del Fiore (sec. XV) and a monumental sacristy. A very important art work is the beautiful silver frontal (the "Paliotto") that decorates the high altar, a masterpiece by Nicola from Guardiagrele. Divided into 35 tiles representing sacred scenes and episodes from Christ's life, this precious work is a highly significant example of Italian goldsmith art and one of the most important works of early Renaissance. It was performed in fifteen years, from 1433 to 1448, ordered by Giosia of Acquaviva.