The church of San Pietro ad Oratorium is in the municipality of Capestrano about 40 km from L'Aquila, in the fertile plain of the Tirino river that at the time of the church foundation was flowing 200m left of the church, while today it flows to the right.
The church was believed to be founded in 752 by Desiderius, the last king of the Lombards, even if the presence of a previous pagan altar on which the presbyterial ciborium is placed leads us to think of the existence of a temple on the site before the 8th century A.D.
Versione Italiana ➩ 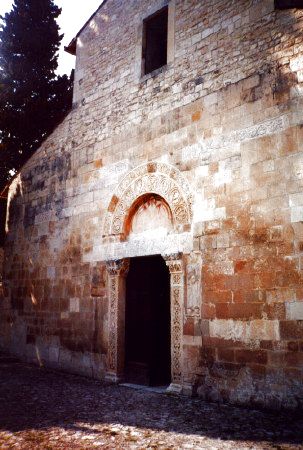 The church was was renovated in 1100 A.D. on the ruins of the ancient church, and consecrated in 1117 by Pope Pasquale I, who granted it many privileges. The marble artist who decorated the portal summarized the history of the church with these words: "A Rege Desiderio fundata anno milleno centeno renovata" (= founded by king Desiderius renovated in 1100). 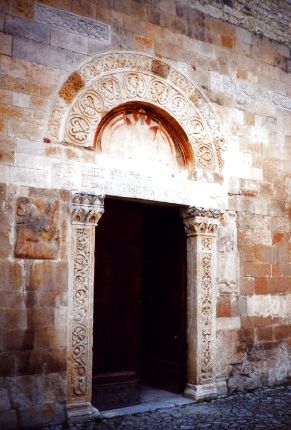 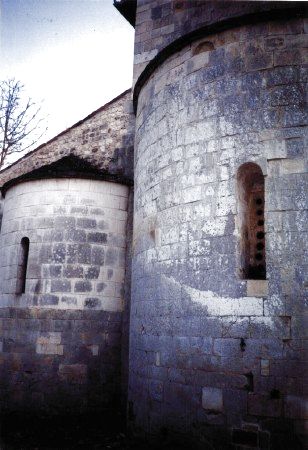 The façade is extremely simple with only one entrance in the center  and a rectangular little window. Many stones inserted in the church walls were reused from previous Roman constructions and fragments of the preceding building; among those, there are remarkable blocks with ribbon-like, weawing decrations going back to the 9th century. 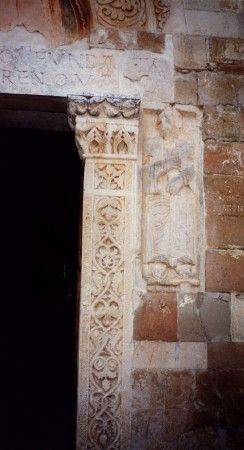 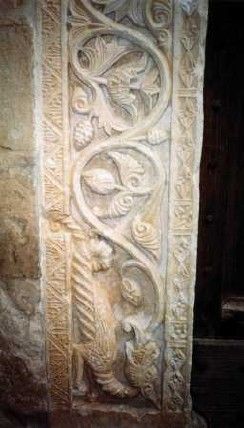 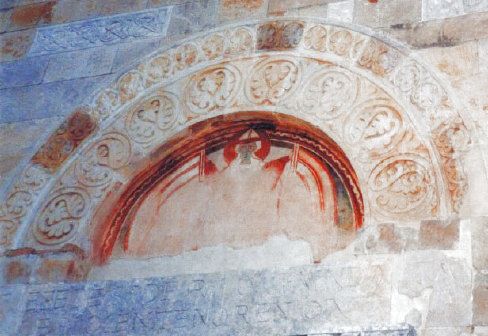 The Outside of the Church

On the back part of the church the three large apses each have a thin loophole window. The main portal of the church, in the center of the façade, is surmounted by a double round arch, divided into irregular stone frames, on which symmetrical ornaments are engraved dating back to the Longobard epoch. The same motif is repeated twice: a first is made of small palm trees alternated with buds around a central tree, which motif  is then encircled  by a second motif of palm trees. These decorations are directly connected to  the portals of San Liberatore a Maiella.

In the lunette there is a precious fresco probably representing Saint Peter enthroned, today however greatly ruined. The two jambs of the portal, with protruding basis and capitels, have decorations and bas-reliefs of the Byzantine epoch. Right of the portal there is a rectangular frame with the whole figure of a saint in high relief, keeping a book in his hands. On the side you can read: S. VINCENZUS DIACUNUS; the writing is related perhaps to the donation of the church of San Pietro by Desiderius to the monastery of San Vincenzo al Volturno. Along the right side of the church there is a secondary portal whose jambs support two carved shelves with classical motives derived from the Benedictine tradition.

Left of the portal, next to the jamb, there is a bas-relief with the bust of David, covered by chlamys, with a fibula on the right shoulder, with his eyes looking up and showing with one finger an insciption outside the statue's own frame : "sculptor imago apparuit ito insomnis hec" interpreted by some scholars as "the sculptor decided this setup following his dreams, during which he had the inspiration". 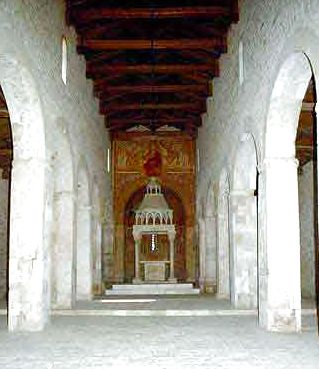 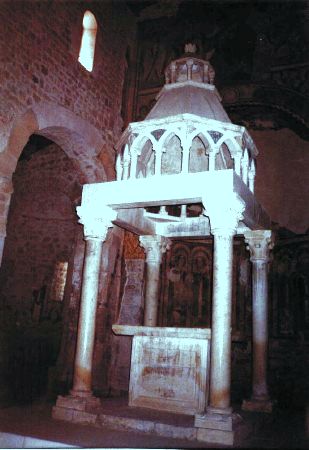 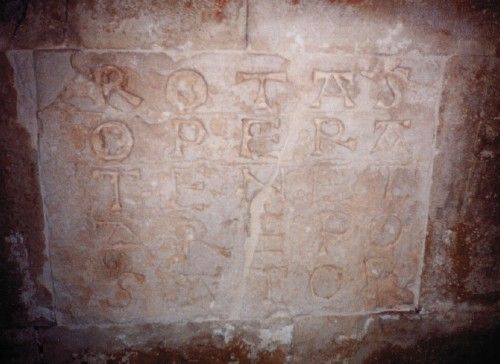 Always left of the main portal there is a stone, a relic of the ancient 9th-century construction, interted into the walls upside down. It contains the so called magical square, formed by five words of five letters each that can be read from left to right, from right to left, from top to bototm and from the bottom to top. The five words "rotas - opera - tenet - arepo - sator" that mean "everywhere-operates-holds-plow-sower", have been variously interpreted, and some researchers thought that they hid the anagram of "Pater Noster". It could be even a reference to the fact that the territory where the church rises was, and is still called, Araturo.

The inside of the building is very sober; there is a stone floor and a wooden trusses coverage. The atmosphere is particularly impressive thanks to the weak light coming from the single-lancet windows and from some small, rectangular windows alongthe aisles. The church is divided into three aisles, with three apses. The aisles are divided into seven arcades on every side supported by four-sided pillars. The presbytery is separated only through three small steps before the altar. The pillars have capitals with decorations reproducing plant elements (leaves, stems, flowers) and some zoomorphic figures.

The Stone Coat of Arms 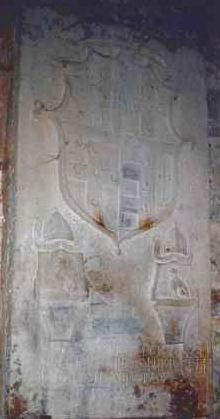 As soon as you enter, to the left of the main door there is a large coat of arms engraved in stone with the insciption: "su r. duce alfonso ecle patrono Hieronimus spesius restauravit 1525". In that year the marriage between Antonio Piccolomini and Mary of Aragona was celebrated here ; the coat of arms with 5 half-moons and a cross was the emblem  of the Piccolomini family, the other with a lily, cross and crown of the Aragones family, the third coat of arms is of Abbot Gerolamo who celebrated the marriage. Antonio Piccolomini was the lord of Capestrano and the surrounding villages.

One step at the first arcade separates the presbyterial area, dominated by the altar, originally a pagan altar surmounted by a  stone rectangle, on which it is still possible to see the signs of sacrifices by fire. In the centre is encased a white stone, containing surely holy relics. The altar is crowned by a fine thirteenth-century ciborium, supported by four columns and lintels on which two tiers of interlaced arches are places, over which a  small polygonal dome rises. 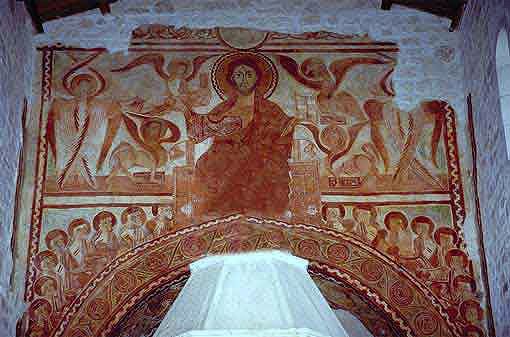 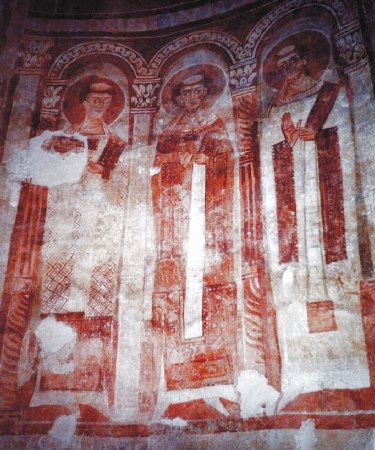 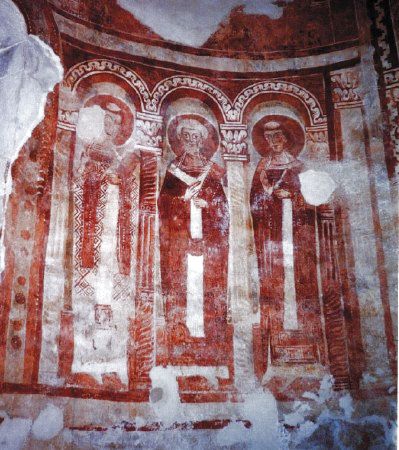 In this essentially monochrome environment, the cycle of frescoes in the apse, mostly in a warm ochre hue, stands out with exceptional beauty. Dating back to the first half of the 12th century, it is the most ancient cycle in Abruzzo. The themes are the usual medieval repertoire and show a clear similarity to the illuminated manuscripts of the time.

On the apsidal arch there is a large ensemble with Christ seated on a throne and blessing in the Greek manner, holding an open book in his left hand. Around there are the symbols of the four Gospel writers: the angel and the eagle on top, the lion and the bull at bottom. Following the curve of the arch there are in a row one after the other the 24 Lords of the Apocalypse, bearded and white-haired, and in the gesture of lifting their golden cups toward Christ. Of the apsidal frescoes only two groups of three saints each are left, each framed within an arcade supported by mullions.