The Spanish Fortress of Aquila

The Spanish Fortress of L'Aquila - commonly called "il Castello" by the Aquilans, is one of the most impressive Renaissance castle in Central and Southern Italy.
The Fort was built during an ambitious military project under the Spanish domination in southern Italy, in the first half of the 16th century, but was never used for war purposes. In the 17th century it was a residence of the Spanish governor, then accommodated French soldiers in the early 19th century and Germans troops in WWII. Declared a national monument in 1902, it was restored in 1951 and became the seat of the National Museum of Abruzzo, of an Auditorium and a Conference Room. Reconstruction work is still underway from the 2009 earthquake to 2020.
Versione Italiana ➩

In the 15th century Aquila had become the second most powerful city in the Kingdom after Naples: there were half a million sheep, wool and saffron were exported throughout Europe; thanks to a clever ruling class, the city had a remarkable autonomy which was unfortunately lost when the Aquilans, during the war between the French and the Spaniards for the throne of Naples, sided with the French. 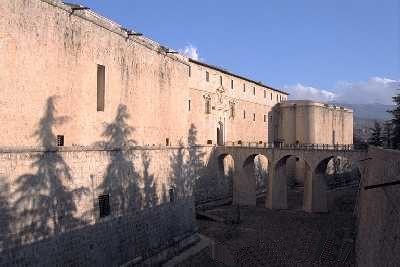 In 1504 Aquila opened its doors to the Spanish conquerors. Then in 1527 the French recovered the city with the support of the citizens and the surrounding town. But just a year later Viceroy Filiberto of Orange, ruling for King Charles of Spain, finally defeated the Aquilan rebels and ordered the city to build a fortress in the highest spot North of the city, exactly where in 1401 King Ladislaw had built a garrison to control the unruly and rebellious Aquilans ("ad reprimendam aquilanorum audaciam"). 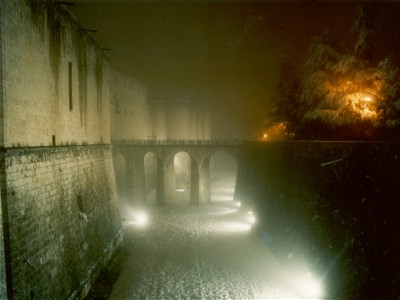 Don Pedro of Toledo succeeded Filiberto and decided to entrust the fortress project to a celebrated Spanish architect, Don Pirro Aloisio Escriva, a great expert of firearms, who had begun to build Castle Sant'Elmo in Naples. The discovery of gunpowder obliged to new methods of defensive construction. Escribà was in charge of the project 2 years, leaving the task to Gian Girolamo Escribà.

In the following 30 years the heavy taxes impoverished the city, which in 1567 begged the Spaniards to stop the construction of the castle; the Royal Court granted the request, and works were interrupted, so some parts of the castle were never completed. The Fortress had cost an enormous sum for the times, and Aquila was obliged also to sell the thick silver case containing the body of St. Bernardine from Siena.

The Fortress, which had been built not to defend the city, but to control it (many cannons pointed to the city) and to be a completely self-sufficient structure, was never used in a battles. Its cannons, always ready to fire, were silent throughout the centuries: the only victim was the city itself, whose decline began with the construction of the fortress and went on under the Spanish dominion. 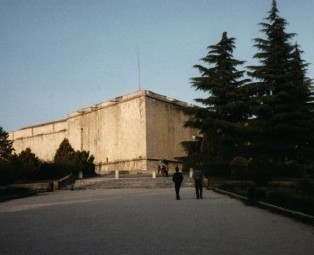 Escrivà planned a giant fortress, made of four bastions connected through mighty walls, 60 meters long, with a thickness of 30 metres at the bottom and 5 meters at top. The walls were surmounted by massive merlons, with openings for the archers and the long-distance cannons. All around the fortress was a ditch (never filled with water) 23 meters wide and 14 meters deep, aimed at defending the foundations from the enemy's artillery.

Escrivà did not forget any detail: the slanted walls would reject enemy fire to the sides; each bastion consisted of two separate and completely self-sufficient environments - called "case matte" - almost independent garrisons on their own. Also the aqueduct to the city was deviated so as to supply the fortress first of all.

Moreover, Don Pirro planned a special anti-mine corridor, a kind of empty space between the outer and inner walls which could be walked only by one man at a time (and which can be visited today), aiming at defending the castle in case of explosion in case enemy soldiers excavated tunnels to leave mines at the foundations. A whole hill was leveled down to supply the white stone necessary for the fortress, while the city's bells were melted to make the cannons. 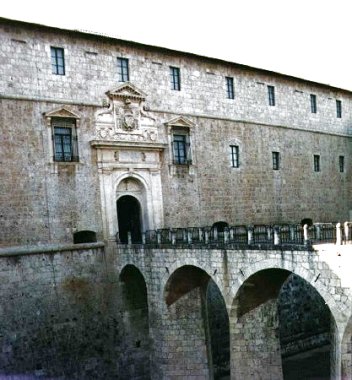 In 1798 the citizens fought against the French who had invaded Italy, attacking, in vain, the Fortress. From then on, the building was used as a prison. After 1860 it became a military headquarters, and in the Second World War was occupied and damaged by the Germans.

Between 1949 and 1951 the castle was restored, and chosen as the seat of the Museo Nazionale d'Abruzzo. The entrance is through a bridge in stone, passing under a portal with the giant coat-of-arms of Emperor Charles V. The Museum is on three floors: on the ground floor, there is the giant skeleton of an Elephas Meridionalis (improperly called mammoth, scientific name Archidiskon) found a few miles from Aquila in 1954, and an archeological section with pieces of the Italic, pre-Roman period, a section with inscriptions and pieces from the Roman towns in Abruzzo, among them a fine Roman calendar from Amiternum (25 AD). 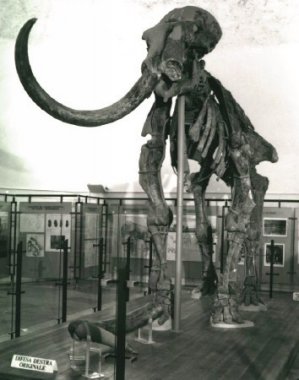 On the first floor the medieval and modern art section, with works of Abruzzese artists of the centuries 13th to 17th such as: the Polyptich by Jacobello del Fiore; a Processional Cross by Nicola from Guardiagrele, a group of wooden and terracotta sculptures such as St. Sebastian work of Silvestro dell'Aquila; then paintings by Flemish and Roman and Neapolitan artists such as Conca, Bedeschini, Solimena, De Mura; finally the contemporary art section with such artists as M. Vaccari, R. Guttuso, V. Guidi, G. Capogrossi, O. Tamburi, R. Brindisi.

After the 2009 earthquake, the Museum was moved to another seat near the Fountain of the 99 Spouts.