Polenta is an ancient traditional Italian dish of togetherness in the wintertime. The most commonly used basic cereal is maize, which gives it its characteristic yellow color, imported into Europe from the Americas in the 15th century. Before then, the polenta was darker and was made mainly with spelt or rye, and later also with buckwheat, imported from Asia.
Known in its various variations almost on the whole Italian soil, in the past it has constituted the basic food of poor cuisine in various northern areas of Lombardy, Veneto, Valle d'Aosta, Piedmont, Liguria, Trentino, Emilia-Romagna and Friuli-Venezia Giulia, regions where it is still widespread, and is traditionally cooked in the winter months also in Tuscany and in the mountain areas of Marche, Abruzzo, Lazio and Molise.
Versione Italiana ➩

Maize flour "polenta" is made with very fine flour, passed through a flour sieve before cooking. Place the pot, possibly in copper, on the fire with enough water. When the water boils, pour a small quantity of cold water, a little salt, and start dropping the flour "rain-like", letting it pass through the fingers of your left hand, while stirring continuously with a proper, possibly wooden, mixer or spoon with your right hand. Go on like this with great patience and slowly, never ceasing stirring so as to avoid clumps. Now and then with a wooden spoon detach the polenta from the pot walls and from the wooden spoon. As soon as reach the right density stop adding flour (if in doubt as to the right density, just stop, you can always add some more later if the polenta is too liquid), go on always stirring and cooking until the polenta detaches from the walls (one-two hours).

Thoroughly clean and wipe the wooden board used to make pasta. You will also have prepared the preferred sauce. When the polenta is well cooked, pour it down on the board. With the wooden spoon spread it quickly until still hot in a thin, regular layer all over and season with ragout or other sauce, and lots of grated "pecorino" cheese.

Seasoning for the Polenta

Polenta is seasoned with great variety of sauces. Moreover, left-over polenta can be heated the day after in a pan with oil, garlic and peperoncino or, if left without sauce, barbecued and used in the place of bread.

The history of polenta is the history of our people. A very ancient dish, in remote times it was made with poor cereals or beans, until maize came from America. Ancient polenta in the area of Teramo, called "fracchiata", was a Whitsuntide dish. It was made with the flour of red ceci beans, of beans or cicerchie (poor beans almost no more grown), and was seasoned with raw oil, or with a onions fried in oil, or with salted sardines, made in pieces and browned in oil.

The highest point in the polenta tradition is to consume it on the wooden board, placed on the common table with all the family around, like it was at the time of the traditional patriarchal families. Polenta is eaten, if spread on a dish, in a circle starting from the outer part and proceeding all around until the final little piece in the center is reached. If all are eating on the spianatoia, each one proceeds consuming the slice in front and moving towards the center (or sideways towards a sausage). 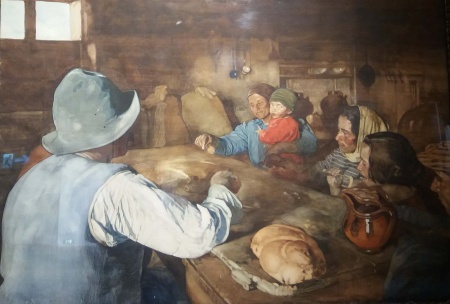 From Abruzzo2000 Maildigests of the early 2000s.
ItalyHeritage on Facebook