This itinerary features the hermitages of San Bartolomeo and Santo Spirito, in the territory of Roccamorice, absolutely a must during an excursion into the Majella and, more generally, while visiting this area of Abruzzo.
If the Gran Sasso is almost the symbol of Abruzzo, being the highest summit, with its rugged peaks where mountaineering itineraries of great difficulty have been traced, the Majella, with its gentle slopes, forested valleys, wealth of streams and springs, certainly is the sacred mountain, so rich in mystical sites, hermitages and monasteries. Moreover, among the rocks and forests, there are innumerable traces of the presence of man since very ancient times.
Versione Italiana ➩

The "Mother Mountain", in the traditions and history of Abruzzo, but also in literature and poetry, the Majella is an inexhaustible source of natural beauty and human history: shepherds shelters, lonely churches, monasteries and inscriptions are almost at every little spot, at all altitudes in the mountain. 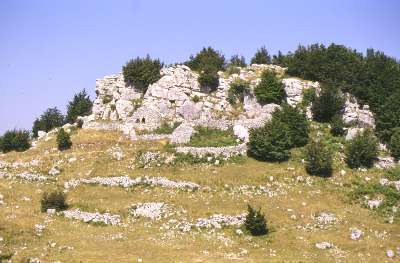 Let us pause a little on a very peculiar feature of the Majella landscape, namely on the widespread presence of ancient hermitages and monasteries, often rising on high rocks like eagle's nests, where centuries ago famous monks and hermits spent most of their lives; one especially, Pietro Angelieri from Molise, will be elected a Pope and later made a Saint as San Pietro Celestino.

The territory of Roccamorice, west of the Majelletta, a lower summit of the mountain range, is where most hermitages and "tholoi" (singular tholos) - dry stone huts - can be found. The magnificent hermitages of San Bartolomeo di Legio and Santo Spirito a Majella are both high among the rocks and reachable through a very complicated system of paths and stairways.

Both hermitages are very dear to the local people religious feelings, and can be visited in a few hours. The hermitage of San Bartolomeo can be easily reached with a nice walk, while a picturesque road amid woods and rocks will take visitors right to Santo Spirito.

San Bartolomeo, at an altitude of 600 meters (almost 2000 feet), rises in the dryest area of the valley, below a natural rock ceiling. Dating back to before the year 1000 AD, it was rebuilt in the latter half of the 13th century thanks to Brother Pietro Angelieri, later pope Celestino V, who was a hermit there from 1274 to 1276.

Santo Spirito, at an altitude over 1000 meters (3300 feet) is surrounded by thick beech woods, hiding the ancient paths followed by the monks visiting the nearby villages and the Majelletta. Here too Brother Pietro Angelieri was a hermit since 1250, and built an oratorium and a number of cells inside rocks.

The visit to the hermitages starts from the little town of Roccamorice (at 520 m a.s.l.), easily connected to the highway A25 Roma-Pescara, exit Scafa. This is a picturesque village on green hills, with narrow alleys and very tipical, ancient houses. There are agritourist farms and good typical restaurants. Leaving Roccamorice, follow the road towards the Maielletta for about 3 km then, at a junction near a "stazzo" (wide enclosed area where sheep used to be kept) and a recently built shelter, turn left down a wide path which will lead you to the Vallone di San Bartolomeo. After a flat section of the path, sided by small iron crosses, there is a steep flight of steps up to the hermitage. Return is back through the same way. The whole walk will take about an hour altogether.

The road to Santo Spirito follows after the stazzo at the junction for San Bartolomeo, and proceeds for about 4 km, an easy comfortable route by car. It is a highly picturesque road below astounding rock walls, deservedly famous among free climbers (Roccamorice is also the seat of a renowned mountaineering and free-climbing school). The road proceeds into a wood and finally reaches the area just below the hermitage of Santo Spirito, where you will leave the car and climb an impressing flight of steps carved into the rock to reach the top. It will take about an hour altogether.

The atmosphere that visitors can breathe among the walls of the hermitages is impossible to describe, feelings of unutterable emotion that can only be experimented first-hand. It is like another world, full of peace and love for nature and all living creatures, inviting the visitors to meditation, religion, contemplation, with a deep message of peace and charity. These are places that clearly bring the faithful nearer to God.

But the hermitages are not the only things worth of interest in the area. Along the road to the Majelletta, it is surely worthwhile to visit the stone huts of Colle della Civita, the typical "tholos" buildings left by ancient sheep-raising civilizations, certainly the most famous in the Majella and throughout Abruzzo.

The total time for a visit to both hermitages is about three hours, one of which walking. Visits may take place in all seasons, with some attention in winter due to possible snow-falls that might block the road. 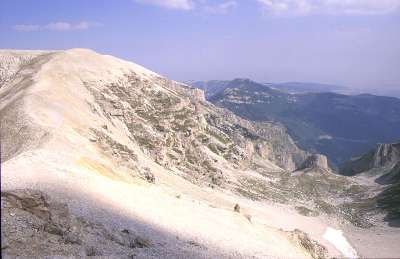 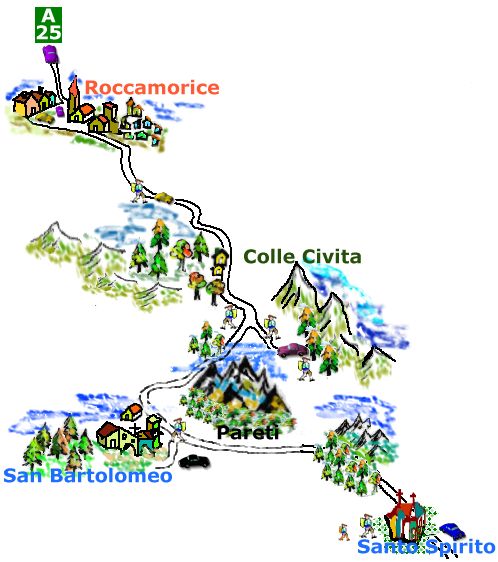