The greatly fringed mountain range culminating with Mount Velino marks the Western border of the Sirente - Velino Regional Park: 60,000 hectares of territory comprised between the Aterno valley and the border with Latium.
The highest peak (Mount Velino, 2486 m) hovers over the Fucino Plateau; to the north there is a complicated system of mountains at crests many of which reach higher than 2000 m, separated by deep valleys and wide plateaus. The crest system partly extends into the territory of Latium, to the north and north west, with Monte Ocre, Monte Puzzillo, and the Monti della Duchessa.
Autumn Excursion in the Sirente - Velino Regional Park, along the Duchessa Lake
Photographs by Valter Carapellese, nature photographer untimely deceased in 2011. - drawing by L. Mazzeschi
Versione Italiana ➩
This is the area of the proposed excursion, among deep valleys created by Carsic erosion and by the action of former lakes and glaciers, such as the canyon called Vallone di Teve (foto a destra), which is in the fall season a total reserve and closed to visitors, being a reproduction territory for deer.

The wide plains at high altitude in the Velino chain are devoid of vegetation, and the landscapes are moonlike, dry, stony; here and there however there arewonderful forests, in almost hidden valleys, which in autumn are rich in red, yellow and green in a thousand hues. A wonderful show. These forests are inhabited by important wildlife: the royal eagle nests here, the gryphon was recently re-introduced, and there are signs of the passage of bears and wolves. 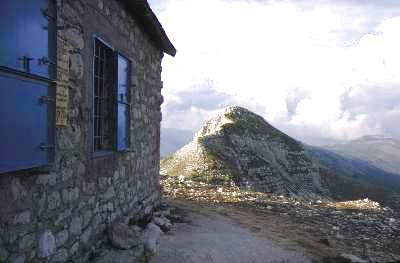 Since the itinerary is a mountain crossing, the best solution is to organize a group and take the trekkers to the starting place in a small van or bus, then wait for them at the arrival point, at the end of the excursion. Starting point is Campo Felice, near the "Rifugio Alantino" (1550 m). The wide plateau was once occupied by a lake basin. From there proceed to the south, along a road which shortly gets into a small valley surrounded by forested hills, and leads to a the remains of a "bauxite mine", a well-known meeting point for cross-country skiers in wintertime. Follow always to the south and enter the Val Leona, covered in woods, then continue along a small road (which is in winter a splendid cross-country track). Climb up a little hill at 1770mt, and leave the wood, then pass a small crest (formed by the debris at the border of an ancient glacier ) and get into the wide Vallone del Puzzillo.

This is the reign of former glaciers. The crests bordering the wide valley are marked by deep "circuses", from which several branches came down to form the central glacier. Reach the "cisterna", (1825 m) where rainy water is collected for the sheep, and from where a number of paths depart; we will proceed straight on to the west. 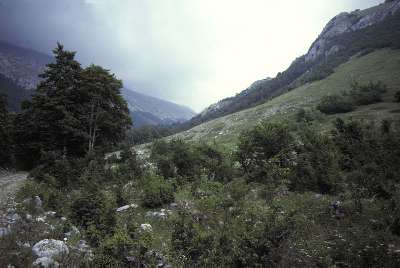 A short climb up a debris terrain (with a spectacular view of the glacial circus called "Fossa del Puzzillo") will take us to Passo del Puzzillo (2073 m). Proceeding along a rocky wall, we'll descend for about 100 m and then rise again to the Selletta delle Solagne (1961 m).

We proceed now to the south, and shortly to the west (it is not possible to continue southward, since we'll get into the Valle di Teve, which is forbidden at this time of the year to safeguard the deer's love season) and passing through a number of small valleys we'll reach the Lago della Duchessa (1788 m), originated from a glacier.

Disregarding all paths to the right, we walk down to the south-west to reach the bottom of the Vallone del Cieco, passing by a number of huts; then we proceed along a deep narrow valley called Vallone di Fua, originated by a river, which gets narrower as we proceed turning into a true, small canyon. A quick descent will lead us to the tiny hamlet called Cartore (944 m), today anbandoned. A dirtroad of about 3 km will take us to the "Cicolana" state road connecting Avezzano to Rieti, where we will have arranged for a car or bus to meet us. 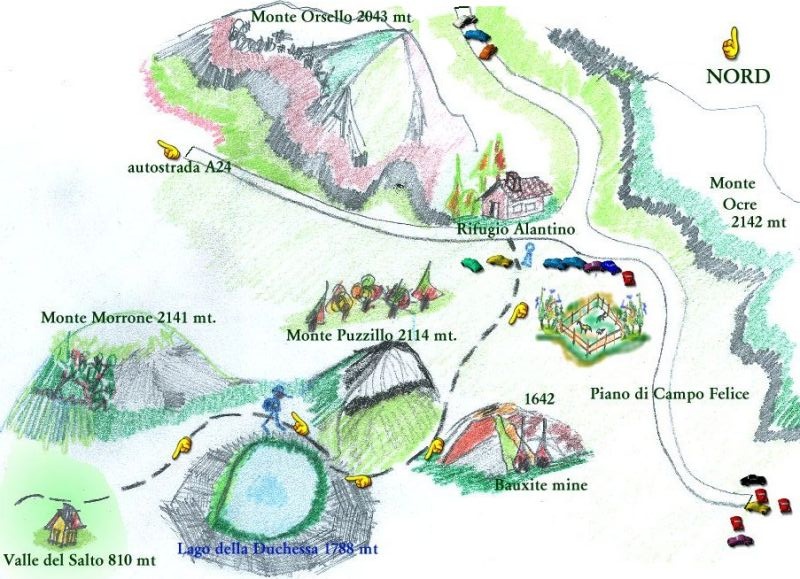