The forest of Torino di Sangro

The Wood of Torino di Sangro, one of the very few relics of mediterranean vegetation to be still found in Italy, follows for about 2 miles the Adriatic coastline, covering the hills in the hinterland of Fossacesia, and comprised in the territory of the town of Torino di Sangro, in the Province of Chieti.
The wood can be reached leaving the Ancona - Pescara - Bari highway at the Val di Sangro exit, then following the Adriatica state road, in the direction of Torino di Sangro, then proceeding towards Marina di Sangro, where there is a small railway station.
Versione Italiana ➩

A few meters from the station there is a road rising into the hinterland, with a "nature" sign pointing to the Lecceta. You follow the road for about 1 km and you'll see a path crossing the road. You can park along the road in the vicinity, and follow the path through the wood descending towards the sea. The itinerary is easy and can be completed in less than two hours (to go and come back). Suggested equipment: comfortable shoes, a water bottle.

After about half an hour you will reach the bottom of a hill, and with a gentle ascent you'll find yourself at the top, to enjoy a rewarding view on the Adriatic, the town of Fossacesia, the Valley of the Sangro river and the abbey of San Giovanni in Venere. You can then also walk down through the dunes to the shore.

On your right you'll be able to see a pure holm-oak wood, the most significant of its kind all along the Adriatic. Inside the wood there are beautiful aromatic herbs and plants typical of the Mediterranean bushes: filirea, lentisk, cisto, knee-holly. This is also the only site in Abruzzo where turtles reproduce in the natural state.

Return is following the same path, and once back it is worth to follow the road upwards as far as the British Cemetery, an oasis of silent, moving beauty, where all over a sunny hill in the breezy Adriatic air, over 2500 soldiers of the Allied Forces mostly British, but also Indians, Australians, South Africans and Canadians who fell in the battle of Ortona during WWII, are resting for eternity. 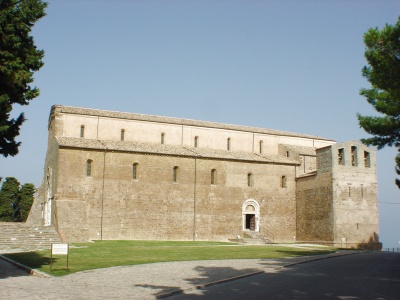 Back on the Adriatic State Road, a very few km away northwards rises the Abbey of San Giovanni in Venere, and from there the road proceeds along the "costa dei trabocchi", those peculiar wooden constructions used by the fishermen of the area, among them near San Vito, the celebrated Trabocco described by Gabriele D'Annunzio in his works, and the house where he lived in isolation to write the Trionfo della Morte. 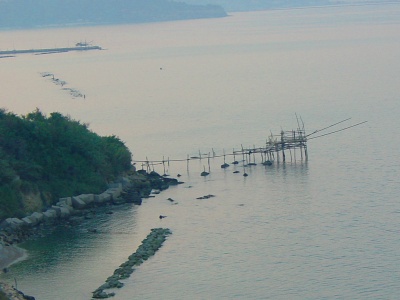