In Abruzzo there is no clear-cut separation between an artist and a craftsman. Just think of the 16th century Castelli ceramics, so finely decorated and painted, or the goldsmiths of Sulmona starting from Ciccardello Di Francesco, a famous chisel artist of the 14th century, who started a tradition which is still so lively and rich today. The range of Abruzzese craftwork is very wide, from goldsmithery to lace, from copper to carved wood and ironwrought.
Versione Italiana ➩

The home of Abruzzese ceramic art is undoubtedly Castelli, where a great school of artists flourished between the 16th and 19th centuries. Present production includes historical reproductions, modern creations and a very wide collection of objects for the home. Visitors to Castelli can not only purchase the typical dishes, vases and bowls decorated in the original Renaissance colors (blue, yellow and ochre) but also visit the laboratories, the museum of ceramic art where the whole ceramic process is described and watch personally the creative process. Other important ceramic centers are Rapino, Ortona, Palena, Loreto Aprutino, Raiano and Fara Filiorum Petri. 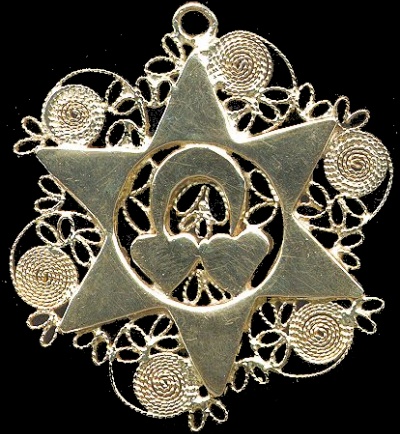 Between the 13th and 16th century goldsmith art reached its greatest splendor in Abruzzo, as witnessed by the great many Processional Crucifixes, Cups and Obstensories in the churches all over the region. The unsurpassed goldsmith master was Nicola (possibly Gallucci) from Guardiagrele, whose works are jealously guarded in the museums and churches of Abruzzo, after one of his processional crosses was stolen years ago in Guardiagrele, and now partially recovered. in Teramo there is a superb Paliotto (altar piece) in wrought silver, enamel, gold and precious stones, and another Cross is in the Museo Nazionale d'Abruzzo, L'Aquila.

Only in the latter half of the 16th century a more popular production started to develop, especially in some rich mountain centers as Scanno and Pescocostanzo; the most notable example is maybe the jewel given as a present to the future bride by her fiance, the "presentosa", representing two hearts against a filigree motiv. The filigree element, which is so expensive and appreciated in our times, was used since it required a lesser quantity of gold; moreover, a lower titre alloy was used, easily recognizable for its reddish color and called "red gold".

It seems that the procedure of working copper was introduced in the Adriatic area by gipsies coming from central Europe in medieval times. The most common copper utensils are pots, pans, molds for cookies, and other common kitchen tools. Once commonly used by the housewife, copperware is today mostly present as decorative elements against walls and over fireplaces.

Ironwroght is largely represented with flowerpots, lamps, gates, balcon rails, in L'Aquila, Loreto Aprutino, Città Sant'Angelo, Chiarino, Pescocostanzo, Guardiagrele. In every village there was some "ferraro" and the trade reached remarkable artistic levels in Guardiagrele with the Ranieri family in the late 19th century.

In the Abruzzese environment, so rich in mountain and forests, woodwork developed almost as a natural need. Shepherds were great woodwork artists, patiently carving and assembling their masterpieces in the long hours devoted to guarding their flocks. Some of their works are nowadays preserved in a number of museums of popular Traditions (Roccacaramanico, Picciano, Guardiagrele, Ateleta and others) and some very precious pieces are kept in the Museo delle Genti d'Abruzzo, Pescara. Soon a great school of wood carvers rese in Abruzzo, and filled with their works (choirs, organs, altars, confessionals, furniture) churches and monasteries.

Among the most notable masterpieces is the wooden ceiling and organ of the greatest Renaissance church in Abruzzo, San Bernardino da Siena, in L'Aquila, the furniture of the church of Santa Maria della Valle in Scanno, the great pieces preserved in the Museo Capitolare in Atri, just to mention a few. Woodcarving was common in Loreto Aprutino, Pretoro, Popoli, Campli, Scoppito, Pescocostanzo. In Arischia (ancient Ariscola), a village a few km from L'Aquila, there is the largest production of "madie", typical wooden containers used to store bread for the family.

It seems that tombolo lace was introduced in the Province of L'Aquila in the 18th century by a group of Benedictine nuns from Cluny, who taught their art to the young girls entrusted to their education. The procedure, which uses only smll spindles, makes this craft unique in Italy. It is stillpossible to see women at work on their tombolo lace in Scanno, Pescocostanzo (where also a Museo del Tombolo was established) and in L'Aquila, where courses are kept to teach this ancient art.

This extremely delicate lace is made with a very great number of small spindles - one piece especially made for Queen Margaret of Savoy required 7,000 of them - and with a special thread, which used to be woven in the past by the nuns of the ancient monasteries of the area, extremely strong and at the same time so thin that dozens are needed to equal the size of one hair. Whereas Venice and Valenciennes laces are made in small pieces which are later sewn together, the Abruzzese tombolo is made in one piece. This, along with the thinness of the linen or silk thread employed, greatly increases its difficulty and preciousness.