One km about from the center of Fossa, a fine ancient village 12 km East of L'Aquila, Santa Maria ad Cryptas is among the best examples of Gothic art in Abruzzo. It was built in the latter half of the 13th century, probably on a previous church of the ninth century AD.
The hut-shaped facade has a peculiar appendix on the left, due to the need of reinforce the church on that side, which was on unstable soil. The portal, though showing previous Romanesque influences, is one of the first Gothic examples of its kind in Abruzzo. The interior follows the model of the Benedictine temple: one nave, a square presbyterium. But the greatest treasure of the church is in the frescoes completely covering the inner walls and vault.
Versione Italiana ➩ 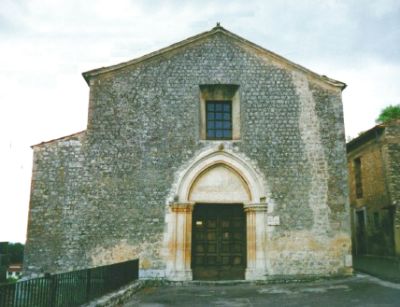 The paintings can be divided into two different cycles belonging to different periods: a first cycle (in the apse, Southern wall, arch and inner side of the facade, was the work of the Cassinese-byzanthine school ; a second cycle was by Tuscan artists and covers the whole Northern wall. Then in the early 16th century the frescoes on the edicola were added.

The narrative begins on the wall right of the Triumph arch, and proceeds along the southern wall with episodes from the Genesis. The first episodes are dedicated to the creation and start from the 4th day, with a young beardless God separating the sun from the moon, then follows the creation of animals and birds. 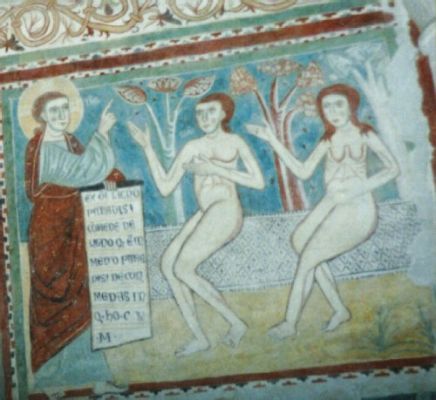 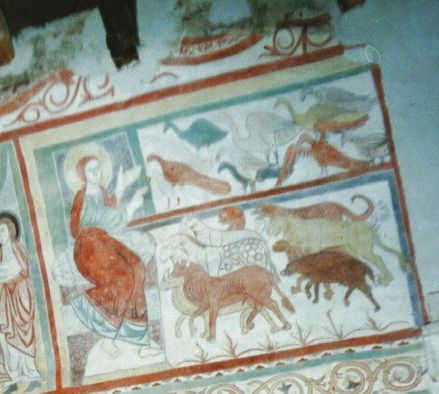 In the central section there are six Prophets with the divine message in their left hands. Other paintings in this section were lost when in 1597 a stone altar with the coat-of-arms of the town of Fossa was erected. 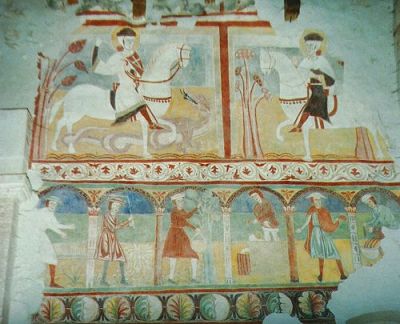 In the section on the left the paintings are in three rows, and include St. George killing the dragon and St. Martin giving his cloak to a poor beggar (photo on the top, right); both Saints are shown on white horses with garments contemporary to those of the knight who ordered the work to be done, probably a certain Guilelmus Morellus, represented in the Presyterium. Just below there is a magnificent calendar with the last 6 months of the year, each represented by a different character performing a farming activity typical of the month: in July wheat harvesting, in August threshing, in September fruit harvest, in October pressing grapes to make wine, in November sowing and in December killing the pig. Finally three giant Patriarchs (Abraham, Isaac and Jacob) holding in their arms smaller female figures with medieval hair styles and monks. 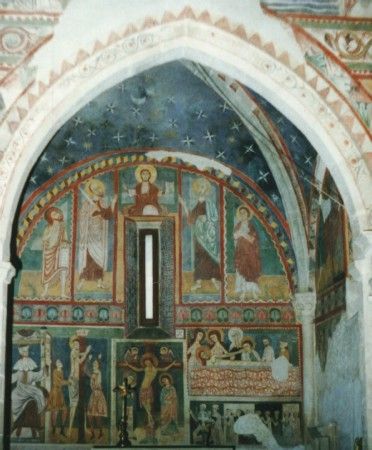 In the apse the most beautiful of the frescoes: the Passion of Christ and the Last Supper, rich in details and with great expressiveness in the faces. In the presbyterium starting from the top, we find St. John the Baptist covered with a cloak in animal skin, St. Paul with a dagger, an adult "Pantocrato", St Peter and finally St. John the Gospel writer. The story follows with the flagellation of Jesus and then the Crucifixion in the center with Mary on the left and John on the right, representing the past and the future respectively. Then there is the Deposition, with the women clasping their arms and John placing Christ's hand to his face. Beneath it some figures representing the medieval sponsors of the work with an inscription stating their names: "Guilelmus Morellus de Santo Eusanio,Uxor eius guilelmi Morelli, Abbas Guidus Guilelma domina, Iohanna, lucetta" (Guglielmo Morello, his wife, Guidus the abbot Lady Guglielma, Giovanna, Lucetta). There are more characters in the southern wall: St. Simeone, St. Jacopo, St. Luke. Below them however time and water erosion caused the painting to fade away. 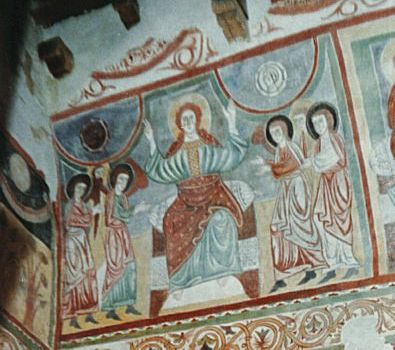 The Benedictine cycle then ends on the inner side of the facade with one of the earliest Final Judgements in Abruzzo. Here the frescoes are divided into four sections: the Apostles, the angels, the resurrection of the dead and Hell. Christ is at the top surrounded by angels playing instruments; then the Elected Soul on the left and the Damned Souls on the right (among them also some monks); then the Souls of the Dead, Michael the Archangel and at the bottom Hell with its awful demons.

A legend says that Dante Alighieri while attending the crowning of Pope Celestine 5th in L'Aquila in 1294, visited Santa Maria ad Cryptas and took inspiration from this final judgement when he wrote the Divine Comedy.

The Northern (left) wall is the work of Tuscan painters, immediate precursors of Giotto and is different in technique and themes. While the basic theme of the first cycle was Christ and God, now it is Mother Mary, as an intermediary between man and the divine. We can identify 12 episodes from the Life of the Virgin Mary, among them the Annunciation, St. Joachim among the shepherds, the Meeting at the Golden Door, the Nativity, the Illness of Mary. Perhaps the most beautiful is the Transport of Mary's body by the apostles, then the Deposition, and finally the assumption with Mary supported by two angels and seated beside Her Son.

In the middle of the Northern wall there is the Annunciation Chapel, with a painting by Sebastiano di Nicola from Casentino dated 1486. On the two sides of the Chapel there are a painting representing the Blessed Bernardine from Fossa (deceased in 1503) ans a Virgin with Child.

Finally the Edicola of the early 16th century, also completely decorated. On the outer walls images of St. Catherine from Alessandria, St Rocco, the Visitation, Assumption and Crowning of the Virgin Mary.