San Camillo de Lellis, who was born and spent his early years in Bucchianico, province of Chieti, contributed greatly to the Reform of the Catholic church in the late 16th century. He is the Patron of hospitals and nurses, and, with San Gabriele, joint patron of Abruzzo.
Versione Italiana ➩
Camillo was born on 25 May 1550 from condottiere Giovanni De Lellis and Camilla de Compellis. His father, a descendant of a family of warriors, was a valiant captain in the army of Charles 5th, always loyal to the Spaniards and taking place to military actions against the French up to the Peace of Cateau-Cambresis in 1559. His mother, originary of Loreto Aprutino, married in Bucchianico Giovanni De Lellis in the year 1526. After six years of marriage she had a first son, Giuseppe, who died still infant. Only after 25 years she was pregnant again, and the little town believed that a true miracle, since she was already advanced in years. Camillo was born while the people of Bucchianico were celebrating their patron feast, and that too was believed to be a divine sign.

In 1567, 17 years old and over 2-meter tall, he followed his elderly father towards Ancona, to be introduced into the army of Venice, in the coming war against the Turks. But his father died at Sant'Elpidio a Mare, so Camillo came back to Bucchianico. Later on he took part to a number of military expeditions, squandering all his wages in gambling and dice. But he felt his life was empty. The words of a friar from San Giovanni Rotondo changed his heart on 2 February 1575, bringing about his conversion.

A wound in the leg took him to the San Giacomo hospital in Rome, where he was appalled at the conditions of the sick. He became a full time nurse and soon was at the head of the hospital staff and services. But he had realized one man was not enough, and he gathered a group of friends involving them in his great plan: devote their life to the service of the sick. In 1582 the Compagnia dei Servi degli Infermi was founded. Four years later Pope Sisto V recognized it as a Congregation, and granted Camillo the right to wear on their robes a red cross.

The appalling conditions of the infirm were not only visible, but also spiritual abandonment. Soon there were priests among Camillo's followers, and finally he decided to become a priest himself. He and his followers offered their assistance in the Hospital of Santo Spirito, but soon also went in search of sick and poor people in the slums and sheds of the city. Pope Gregorio XIV made their congregation into a Religious order, the Ordine dei Ministri degli Infermi, in 1591. Nowadays the Camillians are all over the world, offering their physical and spiritual assistance where the human being is weak and suffering.

For forty years hospitals were his home, and there he trained hundreds of young men to service and charity, with his example and the Rules, a code of assistance that was soon adopted in many hospitals in the other Italian cities, Naples, Milan, Genoa, Palermo. If an army was going to war, Camillo sent his brethren to carry the red cross on the battle fields. If a plague started in a city, he came to assist the sick.

He was back in Bucchianico only after he had become a priest. After 1600 his visits to Bucchianico increased. In 1605 he started the construction of the Convent. His fellow citizens did not believe their eyes: he had left an unruly, fiery young man, he returned an apostle of faith, a forceful educator and reproacher of vices. He founded a catechism school, and obliged the Lord of the place to open a medical room and a public pharmacy.

The painting "San Camillo de Lellis saves the sick in the hospital of the Holy Spirit" was made by French painter Pierre Subleyras Hubert (Saint-Gilles du Gard 1699 - Rome 1749), for the Camillian on the occasion of the canonization of their founder by Pope Benedict XIV in 1746.

The scene depicted is inspired by an episode narrated by Sanzio Cicatelli, the biographer of the Saint. On the night of December 24, 1598 Camillo de Lellis, foreseeing the flooding of the Tiber from its banks, suggested to the Prior of the hospital of Santo Spirito in Sassia to move sick and infirm to the top floor of the building, thus saving them [The painting is preserved in the Museo di Roma]. 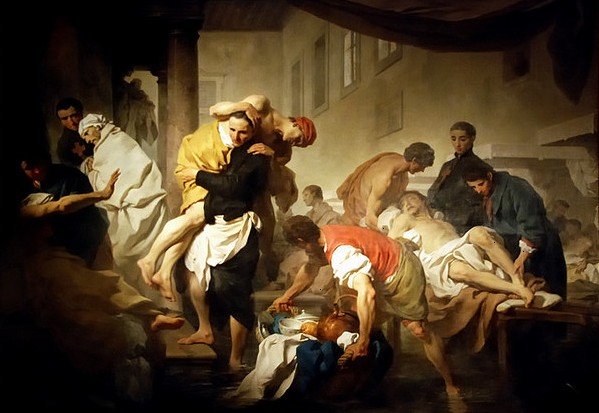