Braccio was born on 1 July 1368 in Perugia, the son of Oddo Fortebracci and Giacoma Montemelini, who were also the lords of the Montone castle. From his first wife, Elisabetta Ermanni, he had three daughters, after her death in 1419, he married his second wife Niccolina Varano, who gave him a son in 1421, Carlo, moreover he had a son out of wedlock, his beloved Oddo.
He started his military adventure at the age of 18 with five knights under the orders of count Alberico of Montefeltro; at that time the Fortebracci family were expelled from Perugia and also lost their castle in Montone. Braccio swore he would come to Perugia to be avenged, and for this reason took the name of "da Montone".
Versione Italiana ➩
He had his first commitments in Romagna, and with guerrilla-like actions he became famous; he now was at the head of 150 knights. Lorenzo Attendolo and Rosso d'Aquila, out of envy for his glory, told Alberico that Braccio planned to kill hit to take command of the army; Alberico believed them and ordered to kill Braccio, who was however able to escape.

His main aspiration was to reconquer the castle of Montone and defeat Perugia. He collected 800 knights and the town of Rocca Contrada offered itself to him, if only he would free them of the siege placed by Luigi Migliorati, the lord of and a nephew of the Pope.

That was his first victory and Rocca Contrada became the base of his army; later on he conquered also Ancona, Fano, Cingoli and drove Carlo Malatesta out of Camerino, obliged Migliorati to a final battle and defeated him at Monte Conscio in 1408.

His fame reached king Ladislaw of Naples, who asked him to fight for Naples in the war planned against Florence and the Pope; Braccio accepted and fought around Todi and Perugia, where he was joined by King Ladislaw for a final battle. The city of Perugia, however, surrendered on condition the King would not allow Braccio into the city; Ladislaw accepted, and also caught the occasion of eliminating his dangerously powerful condottiere.

Again, Braccio escaped and with 1,200 knights and 100 soldiers came under the service of Florence. The situation in Italy was chaotic, three Popes were competing for the Holy See and two kings for the Kingdom of Naples. In Tuscany an alliance was formed under the leadership of Pope Alessandro V and Cardinal Baldassare Cossa, ambassador of Bologna, who would later be Pope as Giovanni XII, while the Kingdom of Naples sided with Gregorio XII. The Alliance invited to Italy Louis II Anjou, offering him the crown of Naples; Louis came to Italy and was crowned by Pope Alessandro V, who also excommunicated king Ladislaw.

During all these wars Braccio developed and improved a new military technique, based on fast maneuvering and lightning-fast movements, starting a new military school which was called "braccesca" from his name. Pope Giovanni XXII gave him the rule over Bologna.

On the death of King Ladislaw, the protector of Perugia, Braccio granted Bologna its freedom for the sum of 180,000 gold ducats, and with quick marches reached Umbria. On 12 July 1416 Braccio defeated condottiere Carlo Malatesta conquering Perugia; with him were his young son Oddo, and his best disciple, Niccolò Piccinino; Carlo Malatesta and his nephew Galeazzo were made prisoners.

Meanwhile in Costanza Martino V was elected to the Papal Seat, and he prepared an army to enter Rome; Braccio asked the new Pope the lordship on Umbria. Martino replied to him sending the army of Guidantonio di Montefeltro, and calling from the South Muzio Attendolo Sforza.

Braccio defeated in april 1419 Guido from Montefeltro, and blocked Sforza. On 14 march a treaty was signed with the Pope, and Braccio came back to Perugia hoping in a period of peace.

Some time later the Pope excommunicated Giovanna, Queen of Naples, appointing as heir to the crown Louis III Anjou, while Giovanna appointed as her heir king Alfonso of Aragon, and called to fight for her Braccio da Montone, who again found on the other side Sforza, who was at the head of the Anjou army. There was not an open battle, though Braccio's army moved all over Abruzzo. Queen Giovanna II gave him lordship on Teramo, and soon after Braccio started his 13-year-long siege of Aquila, whose resistance was directed by Antonuccio Camponeschi.

Meanwhile on 3 February 1424 Braccio was appointed "Gran Connestabile" of the Kingdom and received the feifdoms of Capua and Foggia. The Queen of Naples abandoned the Aragonese and passed to the side of the Angevins under Louis, while Braccio remained loyal to Alphonse of Aragon.

The final clash between the two contenders was just below the walls of Aquila, which still resisted the siege, near the hamlet today called Bazzano. During the march towards the Abruzzese capital, condottiere Muzio Attendolo Sforza drowned in the waters of the Pescara river, near Popoli, and was replaced by Jacopo Caldora, at that time the lord of Castel di Sangro, sided by Francesco, Muzio's son, and by Bartolomeo Colleoni, while Braccio had on his side Niccolò Piccinino and Gattamelata. 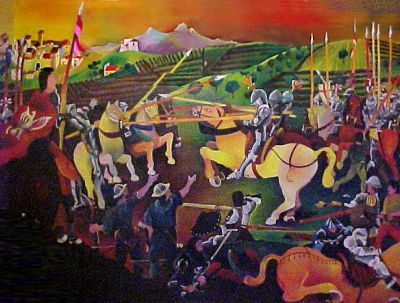 On 2 June the battle, of paramount importance for the future destiny of Abruzzo and Italy, was fought among the most celebrated condottieri of the time; Braccio, mortally wounded in the neck, was made prisoner and transported to Aquila, where he died on 5 June 1424, in a still-existing house, in the street now bearing his name.