People started to work on the "pizze" some weeks before Easter. They were made with flour which had been sieved three times, eggs (at times over 100), sultanas, cinnamon and candied fruit. The most delicate pizze were baked inside oven containers, the more rustic ones were placed on the oven floor, just like the bread. Housewives greatly worried on the raising of the dough, checking the right moment to take the pizze to the village oven and arrive before other women.
From Nice Cortelli Lucrezi, "Le Ricette della Nonna - L'Arte del Mangiar Bene in Abruzzo", first published 1966; out of print, reproduced by courtesy of Mrs Cortelli's son, Dr Alfonso Lucrezi - all rights reserved.
Versione Italiana ➩ 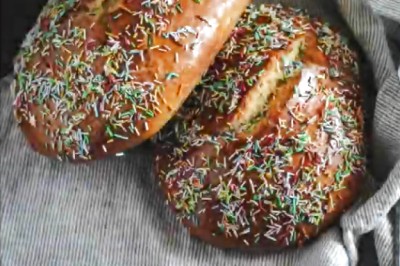 Once baked, all odors and perfumes, they were brought back home and left untouched until Easter morning. On Holy Saturday the pizze were lined on the table along with the painted eggs, the salami, cavallucci, panicelle, fiadoni. The priest came to bless everything with abundant sprinkling of new holy water. The following morning the "compare" was invited and the family and guest together began consuming all the food, usually accompanied by a huge omelette, the traditional dish of Easter morning.

This custom is so deeply rooted in Abruzzo that (as told by Walter Cianciusi in "Collelongo", Teramo 1972) "an emigrant working in the United States, being alone on one very remote Easter day, thinking angrily - I would say with anger and homesickness - to his faraway hamlet and the custom which would have meant for him to be, at that time, in his paternal house dining with his dear ones, made an omelette with 24 eggs and ate up all by himself. Oh, America of the skyscrapers and huge omelettes!"