A visit to this ancient Roman town will give you a feeling of what life was like at the time of the Romans.
Versione Italiana ➩ 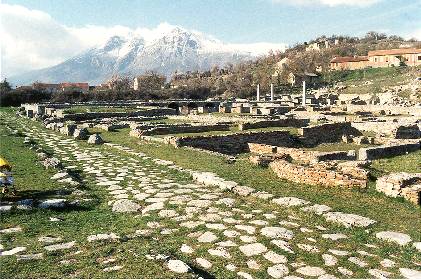 Alba Fucens was the name given by the Romans to a town originally built by the Equi, and later occupied by the Marsi in the IV century B.C., which was called by them Fucentia. Built on a plateau at about 1000 mt a.s.l. under the majestic twin peaks of the Velino, Alba Fucens dominated the valley of lake Fucino, the second largest lake in central Italy with a surface area of about 200 square kms, where fishing was a lively resource and naval battles were also held by the Romans. The lake was partially drained by the Romans under Claudius, and then by prince Torlonia in the late 19th century.

Between 321 and 303 B.C. the Romans had defeated the Italic Alliance of the Marsi, Peligni, Vestini, Marrucini and Frentani, and decided to establish a colony of 6000 inhabitants in Fucentia - Alba , to control the whole territory; Alba Fucens, whose inhabitants were called Albenses, became a rich and powerful town, in 301 was even allowed to have its own mint and in 191 B.C. became a municipium.

Alba Fucens in the I century had become the most famous Roman town in the Aprutium, a key centre on the road Tiburtina Valeria, which connected Rome to the Adriatic. The population worshipped Jupiter and Hercules especially, and the supreme town officials were the "praetores" and later the "quattuorviri iuredicundo" Its destruction and oblivion, as with all Roman towns, was a consequence of the decadence of the Roman Empire and the invasion of the barbarians.

In the Middle Ages a castle was built on a small hill just over the Roman town, destroyed by the barbarians. On a hill on the other side, where probably a Roman temple rose, Benedictine monks built the fine Romanesque church of S. Pietro, with a convent where a new archeaological museum has now been established.

For thousands of years the place was abandoned to devastations and pillage, until in 1949 a joint venture between the Italian Government and the belgian University of Lowain started excavations that went on for decades under the direction of such renowned archaeologists as F. De Visscher, F. De Ruyt, J. Mertens and L. Reekmans of the University of Louwain, and M. de Laet of the University of Gand, without whose unvaluable expertise and commitment this great project would never had come to life. We believe this international cooperation is an important proof of what could be done in Italy and elsewhere to preserve the treasures of mankind's culture. 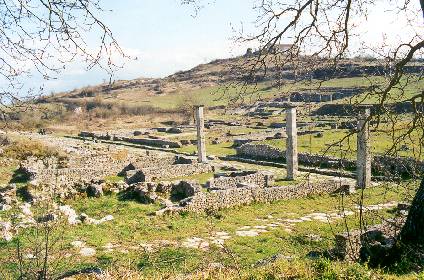 The ruins offer a cross-section of the life of the Roman town: the ancient roads, the Forum, the amphitheatre, the doors and market center, the baths, the Macellum, the square houses, the sophisticated aqueduct and sewage system. Alba Fucens still maintains the massive walls that extended for over 3 km, where four doors were opened: Massa in the east, Fellonica in the north, Massima in the west, and the South door. To the left the entrance coming down from the road, on the hill in the background the church of San Pietro, the ancient Roman road crossing the urban centre can easily be seen. 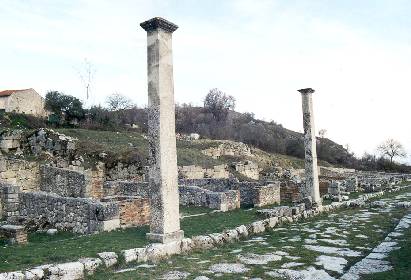 The road is the Decumanus maximus, the main town street which was a part of the Tiburtina Valeria going from Rome to the Adriatic. The (previously covered) colonnade protected a series of shops on the left to allow buyers to walk comfortably even when the weather was bad. In the small shops people practiced an art (a writer whom illiterate people paid to have letters written for them, a jeweller, a tailor) or craft (armorers, potters etc). 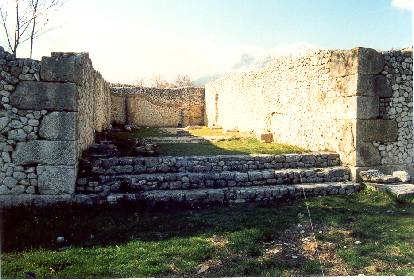 This is the "aula" (sacred cell) in the Hercules' sanctuary. Hercules was worshipped throughout the area, and here a giant marble statue of a sitting god (Hercules epitrapezios, meaning Hercules sitting at a banquet, raisind a cup with the left hand and leaning on his club with the right) was found, restored, and now welcomes the visitors at the entrance of the Museo Archeologico in Chieti. 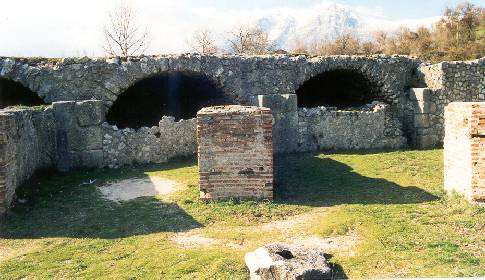 In the background there are covered locals, whose use is not clear. there are also basements of pillars, so the market was certainly covered. To the south-west the wide ager fucense, divided into regular plots, was tilled by the farmers who possibly came to market to sell their produce, animals and eggs, articrafts, and to buy what they needed. 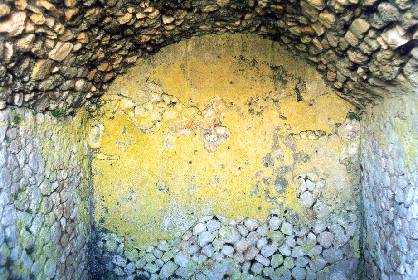 This is probably a room within the thermal baths, which, with the forum, was another key centre of social life, open in special hours also to women. These rooms were used for massage, shaving (Roman citizens were epilated by slaves with a wax), skin care, gymnastics etc performed by specialized slaves. No traces have been found up to now of the three typical Roman pools (frigidarium, tepidarium and calidarium). 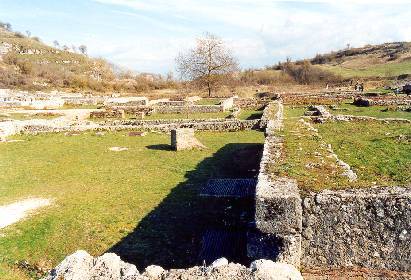 A "villa urbana" was the home of some wealthy, important person. These large "villae" were the town residence of the great families of the place, and usually had rooms for the servants as well, were connected to the sewage system, had a well in the courtyard, a cellar for the ice and provisions, and rooms for the family on the upper floor. The width of the walls suggests at least a second floor. 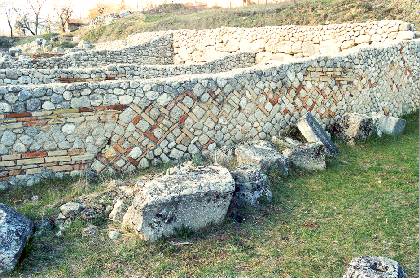 These shops and homes on the east seem richer than the one of the west, probably since they were those that the visitors from the outside met first. The remaining walls suggest a long row of semidetached houses, with one wall in common - which helped maintain the heat in such a cold climate -, inner walls and almost always a hole connecting to the underground sewage system. Water came probably to public fountains connected to the aqueduct. It is possible to see also the mixed construction technique, which here shows big stones in the foundations, and smaller ones, together with red bricks, in the walls. 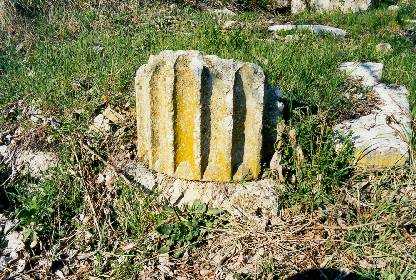 This picture was taken in the forum, a wide rectangular area where the bases of huge columns (in the picture) and wide holes for foundations on wooden poles still suggest the enormous size of the structure. The forum was the meeting place of the Roman citizens, after they had been to the thermal baths, where they discussed politics, other important matters, and trivia surely too.

This is a view from the villa urbana on the west side, the Velino mountain with its twin peaks can be seen in the background, and in front of it the hill on top of which the medieval centre of Alba Vecchia rose, to be abandoned afer the earthquake that hit this area of Abruzzo in the morning of 13 January 1915, killing over 30,000 people.