This treasure of Christendom, history and the whole mankind, the largest Benedictine church in Abruzzo, rose on an island created by two branches of the Pescara river, an island that exists no more. San Clemente is
The abbey of San Clemente a Casauria, in Val Pescara, a few hundred metres from the Torre dei Passeri/Tocco Casauria exit along autoroute A25 Roma-Pescara. The Abbey has been an Italian national monument since 1894. The name derives from the fact that in 872 it housed the relics of Pope Clement I, the fourth Pontiff of the Catholic Church, until the construction of the new Basilica of San Clemente al Laterano in Rome. It suffered serious damage during the L'Aquila earthquake of April 6, 2009, and was restored and reopened in 2011. 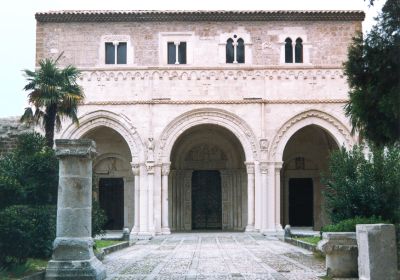 The presence of the Benedictines came to be of great importance for Abruzzo from the 11th century onwards. As spreaders of civilisation and culture the monks have left innumerable testimonies to their presence in Abruzzo. Between the 8th and 10th century, the abbeys of Casauria, San Giovanni in Venere (Ch), San Pietro a Campovalano (Te), San Clemente al Vomano, San Bartolomeo of Carpineto della Nora (Pe), San Liberatore a Majella were all built. The presence in Abruzzo of the Benedictines was a decisive step towards social and economic developments as well. As clever and energetic entrepreneurs, colonizers and improvers, they soon developed a network of economically integrated convents, which, in the absence of economic and productive structures at that time, were autonomous and able to provide for themselves.
Most of their establishments were built on pre-existing pagan temples (Santa Maria di Casanova, Santo Spirito d'Ocre, Santa Maria Arabona, San Giovanni in Venere, Santa Maria del Monte, and others too), and the Benedictines provided the populations of Abruzzo with a wonderful example, encouraging the development of new productive classes and giving the region an impulse that was fundamental to the agrarian revolution and consequent demographic growth.

Emperor Ludwig II had been taken prisoner by Lombard prince Manfred, but thanks to the Pope he was set free and to give thanks in 871 he built on this place an abbey in honor of the Holy Trinity; he wanted the Monastery to be a strategic stronghold of the Empire, and endowed it with a wealth of possessions. On 27 may 872 the holy reliques of Saint Clemens were brought here and the name of the place was changed to "San Clemente".

In 910-911 the Saracens destroyed the monastery, which was rebuilt in 916. To defend themselves against future invasions, the Casaurienses began to fortify all the "villae" under their control. Always under the imperial protection, they gained also the Pope's benevolence: on 22 June 1051 a document by Pope Leo IX confirmed all the possessions of the monastery. In 1078 the Normans led by the terrible Ugo di Girberto ("Maumouzet"), destroyed the monastery and appointed abbots loyal to him.

In 1152 Leonate, became abbot of San Clemente and with the protection also of king William I started a reconstruction of the monastery, destroyed in the course of Norman raids. He ordered the famous bronze doors and started one of the greatest document of the Early Middle Ages: the "Chronicon Casauriense". On Leonate's death (1182) the decadence began, and in the following centuries Casauria lost all its possessions. 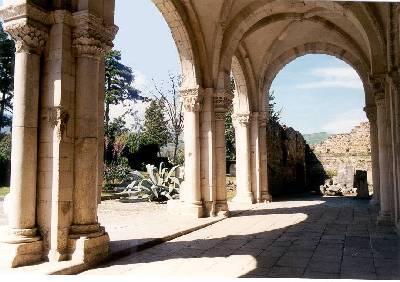 The Abbey is surrounded by a park and a wide back courtyard with a picnic area and an astounding scenery all around, with the Majella in the west and the Gran Sasso in the north. On the left to the church the ancient monastery building is being transformed into a Museum of Sacred History. Presently ruins of a Roman settlement are being excavated along the walls of the museum-to-be. The entrance is through an iron gate which leads onto a short boulevard at the end of which a fine porch keeps the main entrance in the shadow. 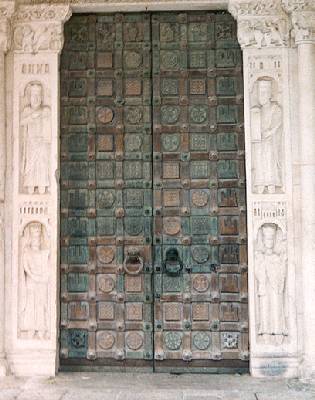 The famous bronze door, where the castles under Casauriense rule are represented, was ordered by Abbot Leonate, and is a masterpiece both in architecture and for its historic significance. The large bronze doors contain 72 small frames, 20 of which show the silhouettes of the castles under Casauriense rule. On the two sides of the door there are 4 majestic figures, representing Hugo, Berengarius, Lotarios and Lambert. 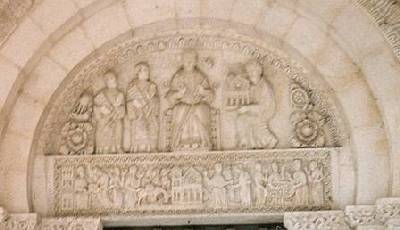 The lunette is divided into five panels and, in an age when nobody could read, told the story of the monastery foundation through wonderfully sculpted scenes, a big one on the top, showing St. Clemens blessing the abbey, offered to him by Leonate, and a long, rectangular "serial" divided into four parts:

The church is divided into 3 aisles. In the central one it is possible to admire the ambon, the candle holder, and the altar. In the left aisle, the urn od San Clemente and in the lower floor the Crypt. 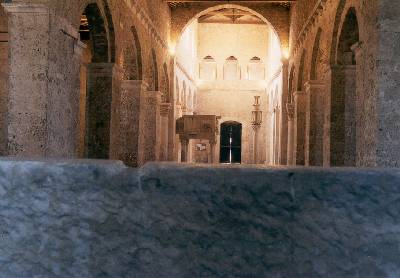 One of the most beautiful among the 32 present in Abruzzo, was the place where the preacher rose to speak to the faithfuls. The columns on which the scaffold rests are surmounted by capitels decorated with palms, which were the symbol of martyrdom and led to heaven, as the christian's soul would open to the preacher's words. 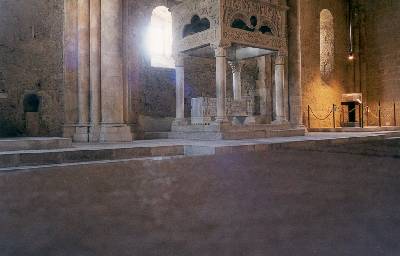 The Altar and Candleholder

The candle holder in Pescosansonesco stone, dates back to the XIII-XIV centuries. The upper part contained originally twelve little columns, representing the Apostles, while the candle holder represented Jesus. The altar is actually an early Christian sarcophagus dating back to the IV century A.D. divided into five panels: from left to right, the second and fourth contains simple decorations, the first represents St. Peter with the Roman guards, the third Jesus between St. Peter and St. Paul, and the fifth Peter's Denial. The reasons for these images is probably that the urn containing the remains of St. Clemens was supposed to contain also relics of the two great apostles. 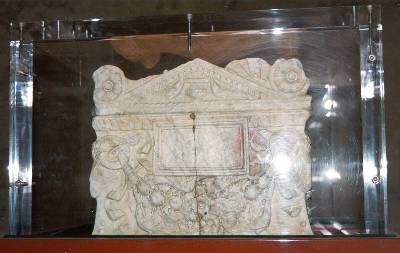 This invaluable alabaster urn, more than 1000 years old, has almost miraculously survived all destructions up to the profanation by French armies in 1799, and is again back in its place, protected by shock-proof glass and alarms. 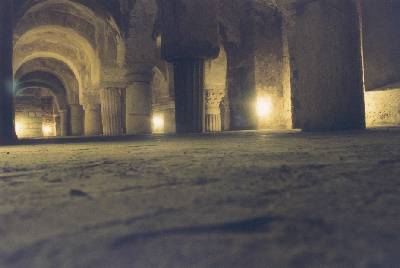 The Crypt was built below the church with material taken from Roman constructions, and was used once, like all the crypts below churches when cemeteries did not exist yet, as a burial site where bodies gradually returned to the earth. So when people joined in the church above to pray, they knew all their loved dead ones were just below. The feeble light and low roof, along with the chilly air in the crypt, create a very "mystical" atmosphere.

(Pictures by Patrizia Rossi and L. Mazzeschi)
Click here for a poster-size picture to print - 165 Kb
ItalyHeritage on Facebook