Turning round to leave many churches in Abruzzo - one of the largest is in the Oratorio of San Pellegrino, Bominaco, in the picture - you are confronted with a giant fresco of a saint Christopher (who is not a saint recognized by the Church) on a wall opposite the altar. An exhibition in Jesi, from 29 oct to 14 jan 2001 will tell you why.
In an apocryphal Gospel of the 13th century there is a legend of a 15-ft tall Cristopher, who wants to become a servant of the most powerful in the world. He goes to a king, but this king is afraid of Satan, who is therefore more powerful, so he goes to Satan but this is afraid of Christ. Finally he goes to Christ, and he finds a hermit who asks him if he can pray and fast. But Cristopher cannot do that. The hermit suggests him to carry people on his shoulders across a river, and Cristopher begins his job in the service of Christ. One night he is carrying a small child, but this gets heavier and heavier and Cristopher fears he will drown. The child, once on the other bank, tells him he is Christ himself, and makes Cristopher's stick blossom with flowers. This part of the story established Cristopher as patron of all travellers. 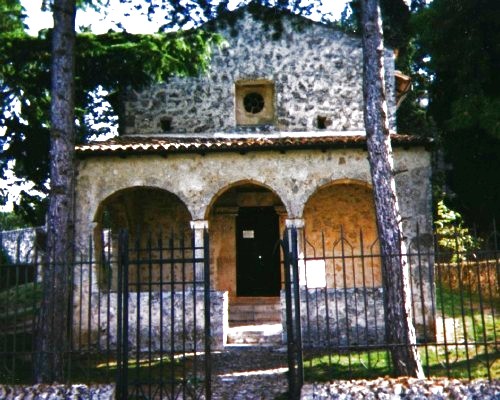 Another part of the story is about his martyrdom. An Asian king sent his army to kill him, but some of the soldiers ran away in fear, others were converted. Then he sent two prostitutes, who too embraced Christopher's religion, then he sent 400 archers, but one arrow wounded the king in one eye. Then Cristopher goes to king, and informs him that the following day the king will be able to kill him, and with his blood the eye will be healed. The king has him beheaded the next day, his eye is healed, but he is converted to Christianity.

This second legend created the traditional belief that whoever saw Saint Cristopher would be protected by sudden death for that day, and sudden death was a calamity for a Christian's soul, since he would go to God full of sins. And that is why there are such large images of Saint Cristopher in medieval churches, to be seen by the people when they turn to go out.