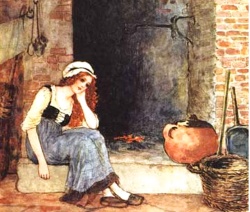 Giambattista Basile - anagrammatic pseudonym of Gian Alesio Abbattutis, was born in Giugliano in Campania on 15th February 1566 and died, always in Giugliano, on February 23, 1632. A writer of the Baroque era, Basile was the first to use the fairy tale as a form of popular expression.
In 1976 La Gatta Cenerentola, the sixth fable of Basile's Pentamerone, was adated by Roberto De Simone into is a three-act musical, in Neapolitan language. In 2017 Gatta Cenerentola was made into an animated film, directed by Alessandro Rak, Ivan Cappiello, Marino Guarnieri and Dario Sansone.
Between 1634 and 1636 he wrote the first collection of short stories entirely devoted to childhood, "Lo Cunto de li Cunti overo Lo trattenemiento de' peccerille" (= trattenemiento de peccerille" (The tale of tales, or how to entertain kids) in the Neapolitan language, published posthumously thanks to involvement of the author's sister, the famous singer Adriana Basile. "Lo cunto" contains characters, such as Fairies and Ogres and plots - as Cinderella and Sleeping Beauty - which later spread widely in European culture.

"Lo Cunto" is a collection of tales of folk origin, written in Neapolitan dialect, and inserted in a frame along the lines of the Decameron. The narrative is divided into five days (hence the other title of Pentamerone), each including ten fairy tales.

The author imagines that around Taddeo, Prince of Camporotondo, a Moorish slave, who had become his wife with a trick, and the young Zoza, in love with the prince, there are ten commoner women - Zeza sciancata, Ceccastorta, Meneca gozzosa, Tolla nasuta, Popa gobba, Antonella bavosa, Ciulla musuta, Paola scerpellata, Ciommetella tignosa, Iacova squarquoia, each telling a story a day, for five days. In the end, the Moorish slave's deception is revealed and the Prince will return Zoza's love. In the video, the animated film's soundtrack.