Italian Idioms starting with A

Idioms are a key aspect in language learning, often connected to the history and culture of a nation. Here some idioms beginning with A- are translated and explained.

The expression originates from a special, ancient loan form practiced by a moneylender for a young man who, finding himself in dire economic conditions, would return the sum of money after his father's death, that is, after the collection of his inheritance. This usually means therefore that the debt is to be paid back in a very long time. The saying has later taken the meaning of "purchases with long, improbable payment extensions" or even more "give a grant". Currently it refers to any payment or debit that includes very long waits for its repayment, which could even never take place.
When someone lends "a babbo morto" may involve that something may be lost forever.

Refers to the Roman custom of granting pardon with the formula "a bis fiat", the full pardon being "a bis fiat fiat", which became contracted form "A BIS FF", or "a bis effe".

A iosa (= In great quantity)

Frequent in colloquial and literary language, it means "plenty" or "a great deal ". The expression is derived from a Tuscan pronunciation of the term "chiosa", indicating bogus coins made of lead or wood used in children's games. Therefore, it indicates a product of such abundance that can also be purchased paying with "chiose".

A piede libero (= with free feet)

It is an expression to indicate someone's waiting for a trial without being in prison. This expression comes from the fact that in the Middle Ages the feet of prisoners were chained.

A ufo (= without paying)

It derives from the initials AUF (ad usum fabricae operis) placed on building materials for the building of St. Peter's, for which no duty was due.

To do something useless, without reason and effect, just like dogs howl at the moon in an absurd challenge.

Acqua in bocca (= water in your mouth)

The origin of this expression is derived from a remedy proposed by a confessor to a gossipy, talkative woman, who could not keep a secret: he advised her to fill her mouth with water whenever she wanted to reveal something.

It is said of things and events that are no longer effective: such as water that, after passing beyond the mill wheel, cannot move the wheel any more.

In Spanish, it means "Go forward, Peter, with judgement from Manzoni's "The Betrothed" (chap. 12th), said by Chancellor Ferrer to his coachman, as the carriage passes through a crowd of demonstrators. It is used to recommend extreme caution and care. 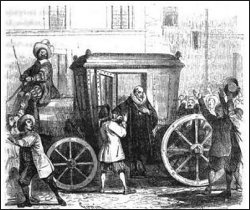 Used figuratively for a person, faction, party (especially if of little weight), whose attitude can, given a situation, determine its evolution in one direction rather than in another.

Indicates the identity of individuals known with pseudonyms or aliases. The expression has its origin in the Catholic religion, where it was used to indicate the name of priests in the past secular condition (e.g. San Pio from Petrelcina, al secolo Francesco Forgione). As for the term "secular", it is derived from the Latin "saeculum" as anything that does not belong to religion but to civilian life.

alla carlona (= as Charlemagne did)

It means to do things inaccurately. It derives from the emperor Charlemagne, an illiterate man, who relied on experts in everything.

It means to leave in silence, secretly and is derived from cheto (= quiet, peaceful).

Alla romana (=In the Roman way)

The expression has two opposite interpretation
1) share expenses into equal parts, with the variant "do in the Roman way", this meaning is more, and seems to derive from the term, now abandoned, "romanata" (= countryside snack), where each paid an equal share of the total expenditure, no matter how much he would eat.
2) Pay what each has eaten, each would pay the extent of the food consumed. There is also a variant, "pagare alla genovese", connected to the common stereotype that the Genoese are stingy.

Rose water is a mild solution of attar of roses, which is used as a cleaning or emollient agent for the skin. Hence the phrase cited above, which is used for superficial, inadequate remedies, simple palliatives.

The Romans named "calendae" the first days of the month, while the Greeks had no such expression; thus the saying is used to describe an event that will never happen.

Helping someone who might later prove to be dangerous derives from a fable of Phaedrus, where he tells about a farmer who saved a snake from certain death and was then bitten to death by the latter.

Andar per la maggiore (= be in the major group)

In medieval Florence that phrase meant being a member of one of the major arts, so refers to something which is very fashionable.

Andare a Canossa (= go to Canossa)

A severe but necessary humiliation, derives from a historical episode: in the struggle for investitures, excommunicated Henry IV was forced to ask Pope Gregory VII for forgiveness, going to the Countess Matilda of Canossa, who was hosting the pope. That winter the king, barefoot and half-naked, was kept waiting three days and three nights before being received by the pope and pardoned. 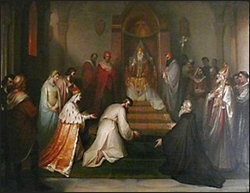 andare in tilt (= to move a pinball causing a tilt)

Derived from the pinball game (flipper in Italian), if the player tilts the pinball to make the ball go where he wants, the pinball may lock and signal "tilt", that is stop to work. It is used when someone doesn't understand any more what he's doing, because of too much stress.

Swooning for great joy, or be very surprised. It is a crippled folk interpretation of "visibilium omnium et invisibilium" (=of all things visible and invisible), the words of the Creed in Latin.

Avere il bernoccolo per... (= to have a knack for)

This expression has a pseudo-scientific origin. An 18th-century German physician, Franz Joseph Gall, the founder of phrenology, argued that different mental attitudes depended on the different skull shapes. Therefore, studying the bumps and the outline of the skull would make it possible to analyze the different personality characteristics and predict whether someone had an attitude to Maths, for example.

Avere l'argento vivo addosso (= have quicksilver on oneself)

Derives from the characteristics of the mercury which, in a liquid state at room temperature, moves wildly.

It refers to the custom of a cheater to hide inside his sleeve an ace, the card of the highest value, and pull it out at the appropriate time.
ItalyHeritage on Facebook