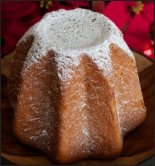 The Pandoro is a typical dessert from Verona, consumed mainly during the Christmas season, of a the typical star-shaped form. Along with the panettone and torrone is one of the most typical Italian Christmas desserts.
The dough of the cake is soft and golden in color, the main ingredients are: flour, sugar, eggs, butter, cocoa butter, baking powder, vanilla. The preparation technique is complex and involves many processing steps.

Recently, it has become the basis for popular home-made variations starting from a commercial pandoro, which is sliced horizontally like a pan di spagna and filled with cream, custard, liquor and decorated with candied fruit like a Christmas tree.

There are various theories about the origin of the recipe. It may have been introduced from Austria, where a so-called Vienna bread was produced, perhaps derived in its turn from the French brioche. The oldest source, however, dates back to the first century AD; Pliny the Elder mentions in fact a baker named Vergilius Stefanus Senex, who prepared a bread with flour, butter and oil. Still another theory is that it derives from pan de oro (= bread of gold) which was served on the tables of the Venetian families.

In Verona it was an evolution of the "Nadalin", and on October 14, 1894 Domenico Melegatti, founder of the confectionery industry, filed a patent for a soft cake in the shape of an eight-pointed star, designed by impressionist painter Angelo Dall'Oca Bianca (Verona, 31 marzo 1858 - Verona, 18 maggio 1942).