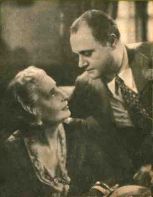 Written in 1940, music by Cesare Andrea Bixio, lyrics by Bixio himself and Bruno Cherubini. In 1941, a film, directed by Guido Brignone, starring Beniamino Gigli, in the role of a famous tenor who returns from the States with his American wife, just in time the meet his old mother (starring Emma Grammatica), who can finally die in peace. It well represented the American dream of the Italian immigrants, and the nostalgia for the homeland, and their mother at home, alone.
At a time when the war was about to lead to disaster Mussolini and the mothers of the regime, Mamma was not only entertainment, but a product at the dawn of an industry, which inherited the musicality of Naples, the tradition of the variety theater and café chantant, a bridge between the past and the future.

Mamma became a hit song in the States in the voice of Italian-American Connie Francis (aka Concetta Rosa Maria Franconero, born in Newark, 12 December 1938). An event clearly points out this emotional power of the song: one day, while Connie Francis was performing in Las Vegas, sitting in the front row with her musicians was Elvis Presley, who suddenly broke into tears - he had recently lost his mother - and fled leaving the room. Then he sent two dozen red roses to Francis to apologize.

One of the most "Italian" songs, celebrating an identity built on the mother figure, Mamma became an international, "global" hymn in all languages, "Mom", "Mutter", "Mama", "Maman"... emotional, maybe for the explosion of the music at the refrain, maybe because this "magical" name touches the secret chords in every heart.