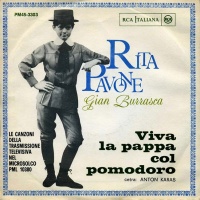 From the Latin pappa= food for children. In 1907 Vamba (aka Luigi Bertelli) published in episodes in the Giornalino della Domenica, a Sunday newspaper for children, his novel Il Giornalino di Gian Burrasca - "Johnny Tempest" in English.
Gian Burrasca is a wild teenager in a boarding school, located in Fiesole near Florence, that leads his fellow students in a protest to ask for their Pappa col Pomodoro.

The song was written by Lina Wertmüller (Academy Honorary Award in 1920) and set to music by Nino Rota (Academy Award for Best Original Score for The Godfather Part II).

The video is a creation of You Tube channel [Rita Pavone Videostory]. [The video may not be seen properly in some older browsers; in case watch it on YouTube directly.]

In 1965, an Italian TV film was made from the novel and broadcast by RAI in eight episodes, on Saturday from 19 December 1964 to 6 February 1965, starring a young Rita Pavone in the role of the main male character. Intended for a young audience, but broadcast in the early evening to gain even a more mature audience, it was freely inspired by the novel of the same name.

«I had the non-indifferent responsibility of the technical-artistic realization of all the music and songs, composed by a great and, for me, unforgettable maestro: Nino Rota, the composer of all the soundtracks of Federico Fellini's masterpieces.

When he made Rita and me listen for the first time to the song-hymn of the boys in the boarding school, called Viva la pappa col pomodoro, we were left at first glance, definitely badly affected, because the rhythm was a kind of old-fashioned minuet and it clashed decisively with the young "world" of Rita and her "fans".

And here came out all the modesty typical of the true "great ones" because he willingly accepted two of my suggestions, that of singing a "bounce-tempo" that would make everything even "danceable" for millions of kids and to play the entire introduction to the Austrian zither player Anton Karas, the author of the famous soundtrack of the film "The Third Man".»