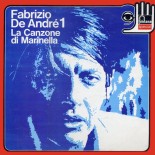 The ballad La Canzone di Marinella is almost a fairy tale, full of colors and images, about a girl who, after finding love, dies under mysterious circumstances.
The song was inspired by a true event of January 28, 1953, the discovery in the river Olona of the body of a young girl, Maria Boccuzzi, who was murdered by multiple shots and her body thrown into the river. The girl had been born in a poor Calabrian village, and emigrated as a child with her family to Lombardy. She eloped with her boyfriend very young, and after they separated the family did not want her back and she started to work as a dancer in locals and was dragged into prostitution. The authorities investigating the case believed she was punished by her pimps but no evidence could be found.

Released in 1964, the song was made famous by a 1967 interpretation of Mina; De André stated in an interview: "I am deeply attached to this song because, regardless of its value, I find that there is a perfect balance between text and music, let's say that it almost seems like a Neapolitan song written by a Genoese. When Mina sang it in the Sixties, it was a turning point in my life. I had been writing songs for seven years, with no practical results and therefore I had almost decided to go back to my law studies. Mina changed it all: with the SIAE (royalties) proceeds I decided to continue to be a songwriter".

Questa di Marinella è la storia vera
che scivolò nel fiume a primavera
ma il vento che la vide così bella
dal fiume la portò sopra a una stella.
This is the true story of Marinella
that slipped into the river in spring
but the wind that saw her so beautiful
from the river carried her onto a star.
Sola senza il ricordo di un dolore
vivevi senza il sogno di un amore
ma un re senza corona e senza scorta
bussò tre volte un giorno alla tua porta.
Alone without the memory of pain
you lived without the dream of a love
but a king without a crown and unescorted
knocked three times one day at your door.
Bianco come la luna il suo cappello
come l'amore rosso il suo mantello
tu lo seguisti senza una ragione
come un ragazzo segue un aquilone.
White as the moon his hat
red like love his cloak
you followed him without a reason
as a boy follows a kite.
E c'era il sole e avevi gli occhi belli
lui ti baciò le labbra ed i capelli
c'era la luna e avevi gli occhi stanchi
lui posò la sua mano sui tuoi fianchi
There was the sun was and you had fine eyes
he kissed your lips and hair
there was the moon and your eyes were tired
he laid his hand on your hips
Furono baci e furono sorrisi
poi furono soltanto i fiordalisi
che videro con gli occhi delle stelle
fremere al vento e ai baci la tua pelle...
There were kisses and there were smiles
then they were only cornflowers
who saw through the eyes of the stars
quiver in the wind and kisses your skin...
Dicono poi che mentre ritornavi
nel fiume chissà come scivolavi
e lui che non ti volle creder morta
bussò cent'anni ancora alla tua porta.
Then they say that while you were coming back
in the river somehow you slipped
and he whi didn't want to believe you were dead
a hundred more years knocked at your door.
Questa è la tua canzone Marinella
che sei volata in cielo su una stella
e come tutte le più belle cose
vivesti solo un giorno, come le rose
e come tutte le più belle cose
vivesti solo un giorno come le rose.
This is your song Marinella
you who flew to heaven onto a star
and like all the most beautiful things
lived only one day, like roses
and like all the most beautiful things
lived only one day, like roses.
ItalyHeritage on Facebook