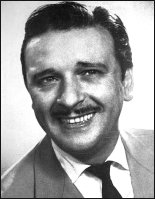 Born in Turin in 1921 from a family originary of Graglia, a village in the province of Biella, he attended the Giuseppe Verdi Conservatory, but left after three years, partly because of lack of interest for classical music, partly for some economic difficulties of his family. He began performing in nightclubs in the city as a jazz singer and polistrumentist (double bass, violin, piano, trumpet). During one performance, he was noticed by Leo Chiosso, with whom he formed an artistic partnership that lasted until Fred's untimely death.

During the war, he was posted in Sardinia; captured by American troops, he started playing with a band for the allied radio of Cagliari. This allowed him to continue making music and experimenting with new rhythms coming from the States. After the war he returned to Turin and started to go playing around in the north of Italy; in Lugano he met the love of his life and future wife, the Algerian acrobat Fatima Robin.

His old friend Chiosso Leo convinced him to write songs together: one of these, "Tchumbala-bey", in 1953 became a huge success thanks to the interpretation of Gino Latilla, who became his mentor. In 1956 appeared the song that was a turning point in her career - "Che bambola" (What a doll) - which sold 980,000 copies without any advertising. Buscaglione became a star and imposed his new style, a mixture of irony and swing: with his group, the Asternovas, he became the main attraction in Italian nightclubs.

He was loved for that scoundrel-like air, something between Humphrey Bogart and Clark Gable, a mix of music, whiskey and women, his exaggerations, the cigarette always between his lips, the full glass placed on the piano.

But, just as an American star, on the night of February 3, 1960 Fred Buscaglione crashed into a truck with his pink Thunderbird on a street in Rome; he was 38 year old. It was a historic night for the Italian costume: a few hours before there was the premiere of Fellini's "La Dolce Vita" - two events symbolizing the end of the Fifties, and the beginning of the Sixties.