A song of 1989, first published as a 6th track within the album "Altri dubbi". In 1996 "Viva La Mamma" was the title to Bennato's collection of hits translated into Castilian for the South American audience. In 1995 the Neri Per Caso recorded a cover of Viva La Mamma in their debut album "Le Ragazze". 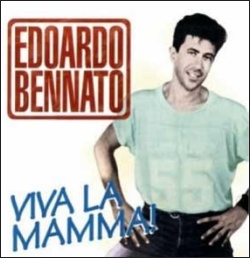 Edoardo Bennato (Naples, July 23, 1946) is a singer-songwriter, guitarist and harmonica player, considered by many critics and musicians among the best Italian rockers.

Language corner:
- "avere i piedi per terra" is an Italian idiom for a practical person.
"Viva", with its longer form "Evviva", is an exclamation expressing joy, praise, hope, and comes from the Latin subjunctive "vivat" (=may live). "Viva", in use since the Middle Ages, has as its opposite, "Abbasso" (=down with). The graphic symbols of the two words are very interesting: "Viva" is represented by a W (synthesis of the two consonants) and by analogy "Abbasso" is represented by an inverted W, which recalls the M of "moriatur" (may die), which would be the exact opposite of "vivat".

The video is a creation of [You Tube channel: ruxfilm].