Sante Fortunato Vanni & the first Italian bookstore in the States

"In a bold move against the trend, in January 2015 "Centro Primo Levi" will reopen S.F. VANNI, the first Italian bookstore in America (active from 1884 to 2004), at its historic location at 30 West 12th Street in Greenwich Village, NY.
"One of those places from an older New York that you hope persists. It's a landmark, of sorts..." [Andrey Slivka] 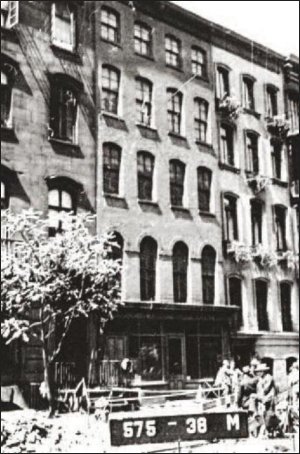 This is great news especially since in the last few years there has been a real slaughter of independent bookstores, such as the legendary Gotham and Coliseum, victims of large retailers or online sellers.

Breathing new life into a pop-up bookstore and cultural space that embodies the cultural memory of Italian publishing and book selling on thr American continent, the "Centro" will launch "CPL EDITIONS", an e-book and print-on-demand service dedicated to the history and culture of Italian Jews.

In Greenwich Village, New York, the first Italian bookstore in the United States is reopening. It is S. F. Vanni, founded in 1884 when Sante Fortunato Vanni from Caltagirone, Sicily, set out to bring Italian culture overseas. The event is scheduled for the end of January 2015. A fundamental contribution came from Alessandro Cassin, editorial director of "Centro Primo Levi" and the son of that Eugenio Cassin who published the first edition in English of "If This Is a Man" in 1959 with London's Orion Press; Cassin explains that the objective of this rebirth is to "turn the spotlight on the history of Italian Jewry in America, but also to revive a myth."

The myth: Sante arrived in New York in 1884, at the highlight of Italian immigration, and started a printing business at 548 West Broadway. Among the books sold, a refined Sicilian-Italian vocabulary, literary classics, cards, holy cards, and so on. Moreover, Vanni also performed a social function, writing letters to the motherland for illiterate Italian immigrants. From "Italian Birds of Passage: The Diaspora of Neapolitan Musicians in New York":

"One of the first book dealers was Pietro Vanni; in his store on Bleecker Street he offered a complete line of newspapers published in Italy and a great variety of escape literature."

Originally located at 548 West Broadway at the Southern edge of Greenwich Village, the bookshop moved to 135 Bleecker Street when in 1931 the Vanni heirs sold it to Andrea Ragusa. Born October 02 1896, Ragusa was a brilliant editorial consultant from Italy: he had worked in Milan as general director of a magnificent publishing house, Fratelli Treves (later Treves - Treccani - Tumminelli) whi, with Giovanni Gentile, the Italian Minister of Education, and senator Giovanni Treccani had founded in 1925 the "Istituto per la Pubblicazione dell'Enciclopedia Italiana" to start a major Italian encyclopaedia.

Andrea Ragusa arrived in the United States with a commercial visa, and an idea that was courageous at the least, if not visionary: to sell Treccani encyclopaedia overseas. In 1932 Ragusa entered a cooperation with the "Casa Italiana" of Columbia University to publish their monthly Bulletin.

The bookstore became something more than a culture "shop", actually a lively reference center for anyone who loved to read and think. He printed 138 titles, among them Pellegrino Artusi's "La scienza in cucina e l'arte di mangiar bene", adapted by Olga Ragusa, as well as a whole range of classics and textbooks for learning Italian. In 1945 S.F.Vanni moved to its present location on 30 West 12th Street. 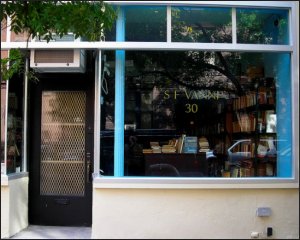 Then on September 01 1974 Andrea Ragusa, at the age of 77, was killed in a robbery in front of his bookshop. This temple of Italian culture in the United States passed to his daughters Isa and Olga until 2004, when the curtain came down.