Franco Zeffirelli is celebrated and honored with so many awards that made him one of the most distinguished Italians on the cultural and cinematic stage. He is the only Italian to have the title of "Sir", given in 2004 by Queen Elizabeth II for his exceptional contribution to the spread of the English theater in the world, staging Shakespeare's great works in a refined, faithful manner. 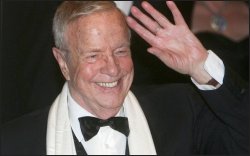 Zeffirelli was born Gianfranco Zeffirelli, on 12 February 1923, just outside Florence. Both his father, Ottorino Corsi (who was to recognize him many years later, when the name in the records became "Gianfranco Corsi Zeffirelli"), and mother, Alaide Garosi, were married to other partners, so his mother was unable to use her surname or Corsi's for her child. She chose "Zeffiretti", the "little breezes" mentioned in Mozart's opera Così fan tutte, but the surname was mis-spelled in the civil records office and became "Zeffirelli".

When he was six years old, his mother died and a group of English expatriate ladies, the "Scorpioni", looked after him. These ladies were subsequently taken to an internment camp, and Zeffirelli never saw them again (the Scorpioni ladies inspired Zeffirelli's semi-autobiographical 1999 film "Tea with Mussolini"). During his years with the Scorpioni, Zeffirelli learned to love Shakespeare. Decades later, Zeffirelli's 1968 Romeo and Juliet was to become the best ever movie adaptation of the play (both he and the film received Oscar nominations).

In 1941 he graduated from the Accademia di Belle Arti, Florence, and on his father's advice began to study art and architecture at the University of Florence. Fair-haired and handsome, Zeffirelli was working as a set designer when he met Luchino Visconti, starting a long cooperation and tormented love.

Between the '40s and '50s he became the assistant of famous directors such as Michelangelo Antonioni, Vittorio De Sica, Roberto Rossellini and Luchino Visconti himself. His activity ranged in various fields, from theater to film, opera and television, painting, politics, education, achieving critical acclaim and audience success.

In recent years (in an interview in January 2013 he claimed he has projects that will keep him busy to the end of the 21st century), in his house outside Rome, in the company of the two adopted sons, Pippo and Luciano, he is concentrating on his Fondazione Zeffirelli for a "Centro delle arti internazionali e dello spettacolo" which was born in May 2013.

His favourite themes came from Shakespeare and religion, fields were he produced movies of exceptional beauty and insight, among them:

Franco Zeffirelli has also been a major opera director of productions since the 1950s.

The documentary in the YouTube video below (the last 10 minutes are shorter, promo versions) includes three musical pieces whose lyrics can be seen in the scrollbox below the video:
The video is no more available in its complete version because of copyright issue. Small parts can be found searching for "Omaggio a Roma Zeffirelli". The transcript is maintained below for reference.
7:25
Nu scennevano le coppie innamorate
se ne stavano abbracciate a pomicià,
er barista je portava la guantiera
cò' la bira e cor caffè che allora c'era.
There came down loving couples
they were embraced cuddling each other,
the barman took them a tray
with the beer and cofeee they had at the time.
8:00
Ma che luna... ma che luna c'è stasera
vede er monno chi s'affaccia a 'sta ringhiera,
da San Pietro all'artre cupole laggiù
fino ar mare più lontano sempre più.
But what a moon... what a moon tonight
you see the world from these railings
from St Peter's to the other domes there
as far as the sea, farther and farther
8:20
Che m' importa se quassù
non c'è nessuno,
che m'importa
si nun trovo da scajà,
What I care if up here
there is no one
what I care
if I can't earn,
8:30
mo' sti fiori li regalo a Roma bella
che li porti ad un sordato in sentinella.
Now these flowers I'll give to beautiful Rome
so they'll be given to a sentry soldier.
10:15
E lucevan le stelle
e olezzava la terra
stridea l'uscio dell'orto
e un passo sfiorava la rena...
The stars were shining,
And the earth was scented.
The gate of the garden creaked
And a footstep grazed the sand...
10:58
Entrava ella fragrante,
mi cadea fra le braccia.
Fragrant, she entered
And fell into my arms.
11:20
O dolci baci, o languide carezze,
mentr'io fremente
le belle forme disciogliea dai veli!
Svanì per sempre il sogno mio d'amore.
Oh, sweet kisses and languorous caresses,
While feverishly I stripped
the beautiful form of its veils!
Forever, my dream of love has vanished.
12:15
L'ora è fuggita,
e muoio disperato!
E muoio disperato!
That moment has fled,
and I die in desperation.
And I die in desperation!
12:25
E non ho amato mai tanto la vita,
tanto la vita!
And I never before loved life so much,
Loved life so much!
16:00
Nessun dorma! Nessun dorma!
Tu pure, o Principessa,
nella tua fredda stanza
None shall sleep! None shall sleep!
Even you, O Princess,
in your cold bedroom,
16:28
guardi le stelle
che tremano d'amore e di speranza...
watch the stars that tremble
with love and with hope!
16:45
Ma il mio mistero è chiuso in me,
il nome mio nessun saprà!
But my secret is hidden within me;
none will know my name!
17:00
No, no, sulla tua bocca lo dirò,
quando la luce splenderà!
No, no! On your mouth I will say it
when the light shines!
17:30
Ed il mio bacio scioglierà
il silenzio che ti fa mia.
And my kiss will dissolve
the silence that makes you mine!
17:50
Voci di donne (le stelle)
Il nome suo nessun saprà...
E noi dovrem, ahimè, morir, morir!
Voci di donne (le stelle)
No one will know his name,
and we will have to, alas, die, die!
18:00
[Il principe ignoto]
Dilegua, o notte! Tramontate, stelle!
Tramontate, stelle!
All'alba vincerò!
Vincerò! Vincerò!
[Il principe ignoto]
Vanish, o night! Fade, you stars!
Fade, you stars!
At dawn, I will win!
I will win! I will win!
ItalyHeritage on Facebook