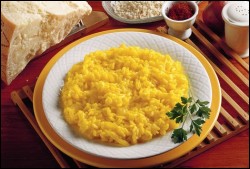 Rice cultivation has been carried out since time immemorial. Nowadays rice is the most widely consumed cereal in the world, but the risotto-type cooking is exclusively Italian: its main feature is the retention of starch that during the cooking process binds the grains together in a creamy compound. Among the different qualities of rice, there are some particularly suitable for risotto, such as Arborio, Carnaroli, Maratelli, Vialone nano.
The present-day risotto preparation is the result of a long evolution: at first rice was prepared with milk, almonds, sugar and spices, then cooking in broth gave origin to rice soups. In the 17th century, due a contamination with Pilaf rice, a more condensed soup was developed and finally, at the turn of 18th century, broth was added a little at a time and the dish was a kind of soft, dry soup. 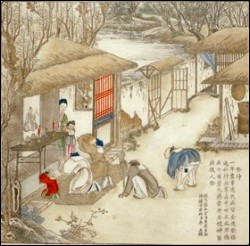 Rice in the East

The first historical references can be found in Chinese writings of about 5000 years ago, when the privilege of presiding over the rice sowing ceremony was reserved exclusively to the emperor, which shows how important rice cultivation was in China.

The veneration that Asian peoples have for rice is demonstrated by a multitude of religious rites. In Japan, special rice varieties were cultivated for the holy spirits. In southern India, the man who must cut off the first ears is appointed by the religious head of the community, and before the harvest a solemn ceremony is held.

In some locations in Indochina rice ears are not cut but grains are collected by hand so that not even one grain will fall to the ground; moreover, rice is collected from the barn only after sunset, since it loves to rest during the day.

Rice in the West

In the Western world the knowledge of rice dates back to the expedition of Alexander the Great, but the Greeks and Latins knew rice only as an imported product and therefore as a kind of luxury, mainly used in medicine. Pliny mentions a cereal called oryza, but there is no certain reference to rice. It was only some centuries later that the Arabs introduced rice cultivation in the Mediterranean basin.

Rice was called the treasure of swamps, since it grows on marshy lands. In the West, there are very few rice rituals, such as throwing it to newlyweds. Instead, as a food, rice is used in a great many ways, from salads to appetizers, from risotti with meat or seafood to delicious snacks.

The term risotto has two possible derivations: some say it came from an exclamation of Frederick Barbarossa (Frederick I Hohenstaufen), who praised a Risum optimum; others maintain it derived from a term used by the Insubres, the Celts that inhabited Lombardy, risott. At the end of the 18th century, the term is first found in a household book by Antonio Albertazzi, a lawyer living in the Val d'Ossola, in northern Piedmont.

The risotto recipe was finally born in 1829, when chef Felice Luraschi described in detail. His recipe included coded 3 basic steps: roasting the rice with butter and onion, then cooking adding the broth little by little, and the final mixing to serve it soft. 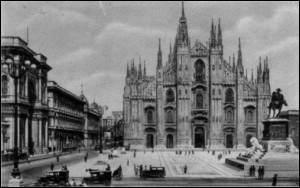 From Leggende e storie milanesi, by Laura Maragnani and Franco Fava: « It was September 1574. For nearly two hundred years works had been in progress for the construction of the cathedral, and , behind it a whole district had risen to house marble workers, masons, carpenters, sculptors, and other artisans from all over Europe. There was also a small Belgian community: Valerio from Flanders, a glass master in charge of making some stained glass windows with scenes from the life of St. Helena, had brought to Milan his most talented disciples.

Among them there was one known for his extraordinary ability in measuring out colors. His secret was adding a pinch of saffron to the ready dough. And because of his habit, he was known with the nickname of "Saffron". Mastro Valerio was not unaware of this trick of his most promising disciple, but always pretended to know nothing, though he used to tease him saying he would eventually put saffron in the risotto as well!

One day, after many years of teasing, the young man decided to play a trick on his master, whose daughter was to be married. He bribed the cook and sprinkled a little yellow powder in the risotto for the wedding dinner. Imagine the amazement of the diners at the table when a pyramid of yellow risotto was served! Some took courage and tasted, and then another, and another, and in the blink of an eye the huge mountain of yellow rice disappeared: the "risotto alla milanese" was born.»

History of the Recipe

The main feature of the Milanese risotto is its yellow color, conferred by saffron. Multicolored dishes were common in Arabic and European medieval cuisine, as the chefs wanted to impress the guests, and the yellow color, often made with egg yolk, reminded of the gold and was a symbol of nobility.

During the 14th century rice was cultivated extensively in the Naples area. From there, thanks to close family and political connections between the Aragonese and Viscontis, followed by the Sforzas, its cultivation moved to the north of Italy, and was extremely successful in the marshy ground of the Po Valley. Early 14th-century cookbooks offered a great many dishes based on rice. Biancomangiare, by Anonimo Toscano, describes recipes base on rice, or rice flour, cooked with milk, sugar, spices and colored with saffron and egg yolk.

One century later Bartolomeo Scappi spoke for the first time about a Rice Dish in the Lombard style, a boiled rice prepared in layers with cheese, eggs, sugar, cinnamon, cervellata (a typical sausage) and capon breasts. The yellow color was given by the cervellata, a kind of salami, colored and flavored with saffron. Also the Rice and Farro Soup recipe speaks of rice «cooked in broth, seasoned with yellow cervellate and after cooking, mixed with beaten eggs, grated cheese, pepper, cinnamon and saffron.»

In these recipes the term risotto was still completely unknown, and the current technique of slow-cooking the rice adding broth gradually was still unknown, since every recipe starts with boiled rice. Only at the end of the 18th century Milanese rice, as it is known today, took shape. The anonymous author of Oniatologia (= food science) titles one of his recipes How to make a rice soup Milanese-style, where rice, boiled in salted water to which a piece of butter when boiling, is seasoned with cinnamon, grated Parmesan cheese and six egg yolks, so as to obtain a beautiful yellow color.

Antonio Nebbia in his Cuoco Maceratese introduces a revolutionary method: he suggests leaving the rice to soak in cold water for two hours, then frying the rice in a little butter and adding cabbage broth.

A more complete preparation appears in the early 19th century, in the anonymous Cuoco Moderno printed in Milan in 1809, where the recipe Yellow Rice in a Pan suggested to cook the rice, fries previously in a sauté of butter, cervellata, marrow, onion, gradually adding broth where saffron had been dissolved.

And finally the classic recipe was described by Felice Luraschi, a celebrated chef from Milan, who printed in his Nuovo cuoco milanese economico, 1829, a recipe titled Risotto alla Milanese:

«Cut one onion with a crescent knife, add some beef marrow and a little butter, toast and sieve everything, put the needed amount of rice, a little saffron, a little nutmeg, and cook it by adding a good stock from time to time, when half cooked add half a cervellata sausage, let it cook, put the grated cheese and serve.»

Compared to today's recipe, just wine is missing. At the beginning of the 20th century, Pellegrino Artusi in his classic La scienza in cucina e l'arte di mangiare bene, provides two recipes for the Risotto alla Milanese, with and without white wine. In the first recipe he does not mention ox marrow or other fats; in the second, which he says is «heavier in the stomach but tastier», marrow and white wine appear. He had in fact realized that this fat made the dish stick to the palate, therefore a touch of acidity was needed to de-grease the mouth and give strength to the risotto. 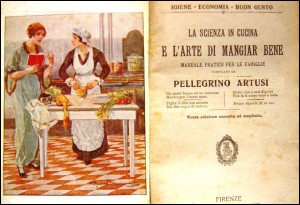 Finally, in recent times Gualtiero Marchesi, the founder of the New Italian Cuisine perfected the recipe, advising to proceed as follows:

«Toast the rice in a little butter, start cooking with broth, then add saffron; meanwhile, melt the onion separately in a little butter and white wine, add very cold fresh butter, in order to obtain a smooth cream. Stir the risotto with this butter when cooked.» 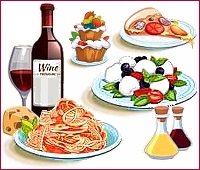